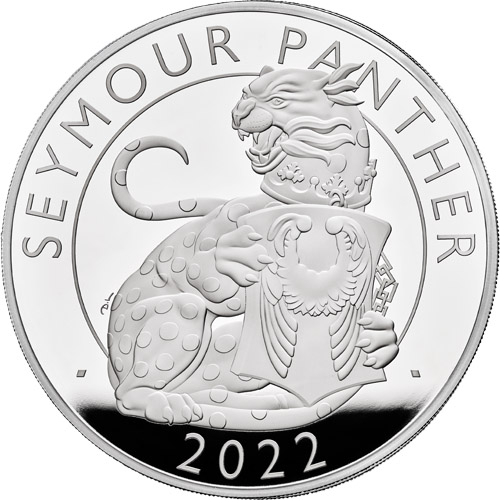 The Royal Mint introduced its Queen’s Beast Series in 2016 to celebrate the longevity and diversity of the Royal Arms of England. The beasts used by monarchs for more than 800 years were featured in a 10-coin release from 2016 to 2021. Now, the Royal Mint embarks on a new heraldic beast series that showcases the most notorious house to rule the throne of England. Right now, 2022 1 Kilo Proof Silver British Tudor Beast Seymour Panther Coins are available to purchase online at Silver.com.

Each 2022 1 Kilo Proof Silver British Tudor Beasts Seymour Panther Coin available in this Silver.com listing comes to you with individual packaging. The coins are safely held within a wooden box and come with a Certificate of Authenticity from the Royal Mint. The release of the Proof Seymour Panther is the first proof design in the Tudor Beasts Series.

The Seymour Panther came to the heraldry of the House of Tudor during the reign of King Henry VIII. The infamous monarch who went through six wives during his reign held court throughout much of his rule at Hampden Court. Moat Bridge is the entrance to Hampden Court and is lined by the images of ten heraldic beasts, each of which featured prominently during the rule of King Henry VIII.

In the obverse design of 2022 Proof Silver British Tudor Beasts Seymour Panther Coins, you will find the effigy of Queen Elizabeth II. Her Majesty is shown here in right-profile relief at the age of 89 as she wears the George IV State Diadem Crown. The design was created in 2015 by Jody Clark to serve as the fifth-generation effigy of the Queen on British coins.

On the reverse side of 2022 1 Kilo Proof Silver Tudor Beasts Seymour Panther Coins is an image the Seymour Panther. The panther belongs to the House of Seymour and came to the history of the House of Tudor with King Henry VIII’s third marriage to Jane Seymour. The panther is shown here supporting a shield that has the Seymour Wings, a set of joined wings that have the wingtips pointed downward.

If you have any questions when you buy silver online, please don’t hesitate to ask. Silver.com customer service is available to assist you on the phone at 888-989-7223, online using our live chat, and via our email address.