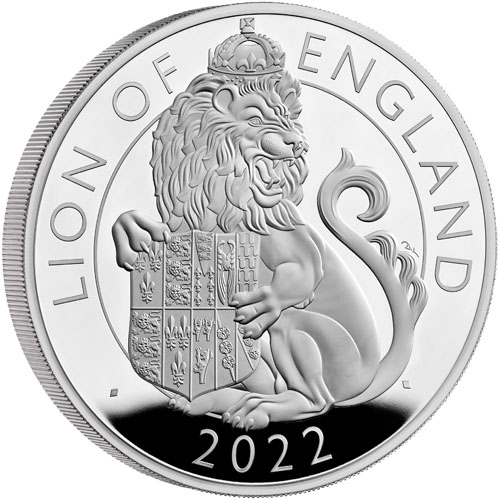 The Royal Mint launched a new series of gold and silver coins in late 2021 honoring the heraldry of England and the monarchy. A follow-up series to the popular Queen’s Beast Series, the new Tudor Beasts Series features imagery based on the stone statues from Moat Bridge at Hampden Court Palace. Today, 2022 1 Kilo Proof Silver British Tudor Beasts Lion of England Coins are available to you online at Silver.com.

Moat Bridge is an entrance to Hampden Court Palace, King Henry VIII’s preferred residence and seat of power during his reign. Along the bridge, there are 10 stone statues that celebrate the heraldic beasts that were display throughout his reign. In particular, these reflect the period of his marriage to Jane Seymour, his third wife.

All of the 2022 1 Kilo Proof Silver British Tudor Beasts Lion of England Coins listed here come with individual packaging. The Royal Mint offers these coins in wooden presentation boxes with a Certificate of Authenticity included. These items arrive together in a themed shipper. As proof coins, each one has a frosted design element with a mirrored background field.

On the obverse of 2022 Proof Silver British Tudor Beasts Lion of England Coins is Queen Elizabeth II. The current and longest-reigning monarch of England, Elizabeth II is shown here in the fifth-generation portrait of her reign. The design was created in 2015 by Jody Clark and features the Queen at the age of 89 with the George IV State Diadem Crown.

The reverse field of the 2022 1 Kilo Proof Silver Tudor Beasts Lion of England Coin comes with an image of a shield supported by the Lion of England. The crowned Lion of England is seated and supports a shield with the impaled arms of King Henry VIII and his third wife, Jane Seymour. Jane Seymour was the only wife of Henry VIII’s six wives to bear him a son who lived beyond infancy.

Please contact Silver.com if you have any questions about silver for sale. Our team can help you at 888-989-7223, online using our live chat, and via our email address.