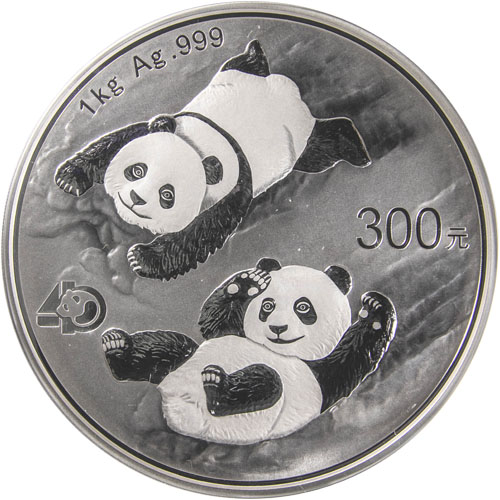 The Silver Chinese Pandas from the Chinese Mint have been available since 1983. Rooted in the production of proof silver coins for sale, the Silver Panda Series has been available in BU and Proof since 1989. The proof collection offers the largest weights with 1 Kilo, 12 oz, and 5 oz options available. As of 2016, the 5 oz coin has been offered as the 150 Gram coin while the 12 oz coin has fallen out of favor. Now, 2022 1 Kilo Proof Silver Chinese Pandas are available to you for purchase online from Silver.com.

The Chinese Panda Series of bullion coins launched at the Chinese Mint in 1982. The series began with 1 oz, 1/2 oz, 1/4 oz, and 1/10 oz gold BU coins. In 1983, the mint added the 1/20 oz gold coin to the BU series and introduced the first-ever silver coins in the collection. However, the first silver coins were issued only as proof options.

In the reverse design of 2022 1 Kilo Silver Pandas is a depiction of the Hall of Prayer for Abundant Harvests. This building has featured on the coins in this series, both gold and silver, since 1982.

These 2022 1 Kilo Proof Silver Chinese Pandas are available with individual boxes and a Certificate of Authenticity. The coins are proof specimens with frosted design elements and mirrored background fields. The coins come with a 40th-anniversary privy mark on the obverse that includes the digits 40 with a panda in the zero.