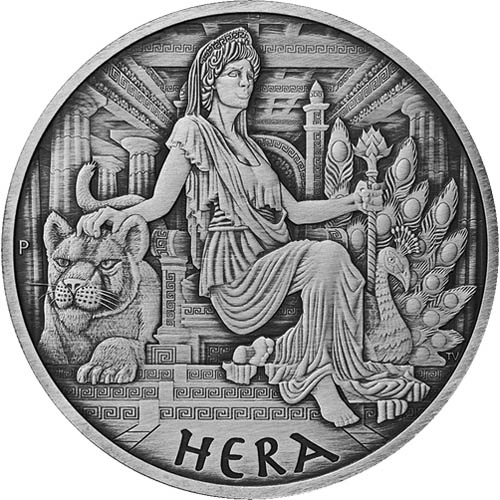 The new Gods of Olympus Series from Tuvalu and Perth Mint is built on the previous success of the 2014-2015 series of a similar name. This previous series was released in separate stages, while the current collection is all part of the same series. Right now, 2022 1 oz Antique Silver Tuvalu Gods of Olympus Hera Coins are available to purchase online at Silver.com.

Each 2022 1 oz Antique Silver Tuvalu Gods of Olympus Hera Coin available here comes with an individual plastic capsule. The coins in this listing come with an antique polish. This finish allows the coins to deliver visuals that appear to be hundreds of years old, even though each piece is a modern coin.

The obverse side of 2022 Antique Silver Tuvalu Gods of Olympus Hera Coins comes with an effigy of Queen Elizabeth II. Her Majesty is shown here in right-profile relief wearing the Girls of Great Britain and Ireland Tiara. Designed in 1998 by Ian Rank-Broadley, this portrait first appeared on the coins of Britain from 1998 to 2015.

On the reverse field of 2022 1 oz Antique Silver Gods of Olympus Hera Coins is an image of Hera. She is seated in the throne of the Temple of Hera with a lion at her right-hand side and a peacock on her left. The design includes the lotus staff in her hand.

Perth Mint was founded in 1899 as the third and final branch of the Royal Mint in Australia. The mint operated as an official producer of Australian coinage through its federation period and is today owned by the state government of Australia. All of its coins are legal tender courtesy of the Currency Act of 1965.

If you have any questions about silver coins for sale, please feel free to ask. Our team is available to you at 888-989-7223, online using our live chat, and via our email address.