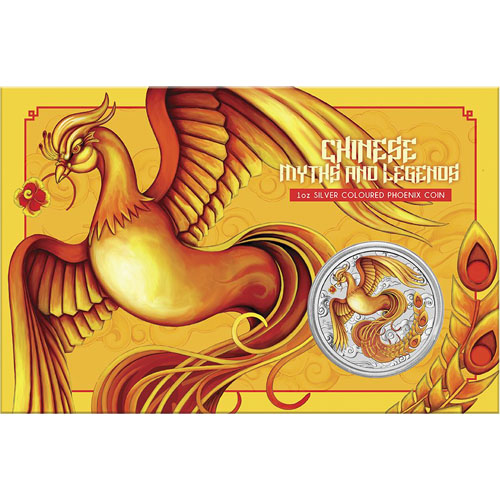 One of the original Four Spirits of Chinese cosmology, the phoenix is a sacred bird thought to bring good fortune to those in need. Some say the phoenix is an auspicious creature that has appeared at certain times throughout history when a new emperor prepares to take the throne. Others view the bird in more general terms as a symbol of hope and renewal. Regardless of your take on the phoenix, there is little doubt that it is one of the most majestic mythical creatures in all of history. Today, 2022 1 oz Colorized Silver Australian Chinese Myths and Legends Phoenix Coins are available to you online at Silver.com.

All 2022 1 oz Australian Chinese Myths and Legends Phoenix Coins are delivered to you packaged inside a stunning display card. These cards are illustrated with a phoenix on the front and also contain the name of the series. The coins themselves have been struck at the Perth Mint in .9999 fine silver and include beautiful, colorized detail on the phoenix design by artist Lucas Bowers.

A portrait of Queen Elizabeth II by engraver Jody Clark is shown on the obverse of 2022 1 oz Colorized Silver Chinese Myths and Legends Phoenix Coins. In this design, Her Majesty appears in right-profile relief wearing the George IV State Diadem. Hallmarks are shown along the edge.

A phoenix is depicted on the reverse field of 2022 Colorized Silver Phoenix Coins. This stunning design by Lucas Bowers showcases the bird in flight with its majestic tail feathers extended below. In its mouth, you’ll see a flower from a paulownia, which is thought to be the only tree in which this bird will sit.

The Phoenix is a legendary creature that has appeared in countless myths and tales. More recently you’ll find the bird in popular stories such as Harry Potter and Mulan. But you can also go back to ancient times to find tales about the phoenix, many of which differ across cultures. In Greek mythology, the bird is known for its regenerative abilities, which occur every 500 years. In Chinese myths, the phoenix, or Fenghuang, is a sacred creature that will bestow blessings on those most worthy. The phoenix has also historically been seen as a symbol of Yin and Yang.

Please contact Silver.com if you have any questions about silver for sale. Our team can assist you on the phone at 888-989-7223, online using our live chat, and through our email address.