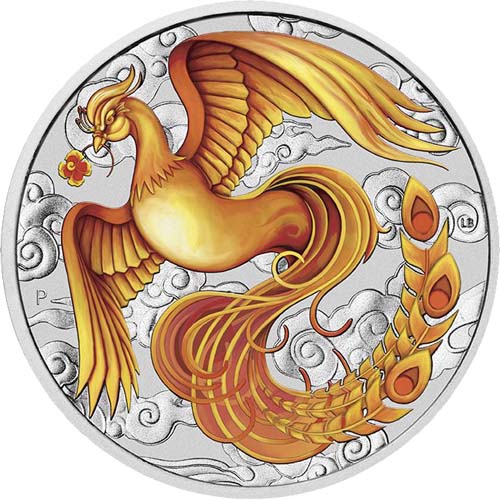 The Chinese Myths and Legends series from the Perth Mint resumes in 2022 with a brand-new release featuring a phoenix! Fans of the series will remember 2017 when the phoenix was paired with the Chinese dragon. This time, the phoenix is presented all on its own, which allows you to fully appreciate the splendor of this beloved mythological creature. Today, 2022 1 oz Colorized Silver Australian Chinese Myths and Legends Phoenix Coins are available to you online from Silver.com.

In Chinese culture, the phoenix was originally believed to be two separate birds, a male and female, feng and huang. They were thought to represent the opposite yet complementary forces of Yin and Yang. However, over time the birds morphed into a single female phoenix, who then became associated with the male Chinese dragon. In the healing practice of feng shui, placing statues of a dragon and phoenix in the bedroom is believed to bring good fortune to a marriage.

These 2022 1 oz Australian Chinese Myths and Legends Phoenix Coins have been struck in .9999 fine silver and have received stunning colorized details on the reverse design. 5,000 total coins were minted, with 1,000 packaged in a special collector’s card, and 4,000 in basic plastic capsules. The coin in this listing is the encapsulated version.

The obverse of 2022 1 oz Colorized Silver Chinese Myths and Legends Phoenix Coins contains a portrait of Queen Elizabeth II by Royal Mint engraver Jody Clark. This 5th Generation design continues to be used on many coins across the Commonwealth nations. There are inscriptions along the edges that read Elizabeth II, Australia, 1 oz 9999 Ag, 2022, 1 Dollar.

On the reverse face of 2022 Australian Chinese Myths and Legends Phoenix Coins is a beautiful phoenix design in full color. The colors consist of a range of orange-golden hues, which aligns with the traditional fiery depictions of the phoenix from classic mythology. In the background, there are various clouds, which symbolize good fortune. Also shown is the P mintmark and designer Lucas Bower’s initials LB.

Please contact Silver.com if you have any questions when you buy silver online. You can call us at 888-989-7223, chat with us live online, or email us directly.