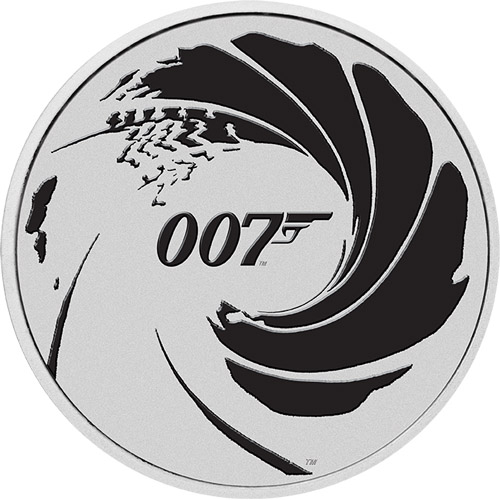 The Perth Mint released yet another new James Bond-themed coin with 2022 date marks as the world continues to celebrate the 25th feature film in the franchise. The design available here offers the iconic 007 logo with black colorization added to select fields of the reverse design element. Now, 2022 1 oz Colorized Silver Tuvalu James Bond Series 007 Coins are available to you for purchase online from Silver.com.

Queen Elizabeth II is found on the obverse of 2022 1 oz Colorized Silver Tuvalu James Bond Series 007 Coins. Her Majesty is depicted here in right-profile relief wearing the Girls of Great Britain and Ireland Tiara. Designed by Ian Rank-Broadley, this effigy first featured on British coins in 1998 and has been commonly used throughout the Commonwealth Nations.

James Bond’s iconic 007 logo from the feature films is depicted in the reverse design of 2022 Colorized Silver Tuvalu James Bond Series Coins. The 007 logo is at the center of the gun-barrel pattern, which has black colorization in some of the swirls of the pattern.

These 2022 1 oz Colorized Silver Tuvalu James Bond Series 007 Coins are available in black presentation cards with a replica of the 007 logo and gun-barrel design. The 1 oz silver coins in these presentation cards are in Brilliant Uncirculated condition.