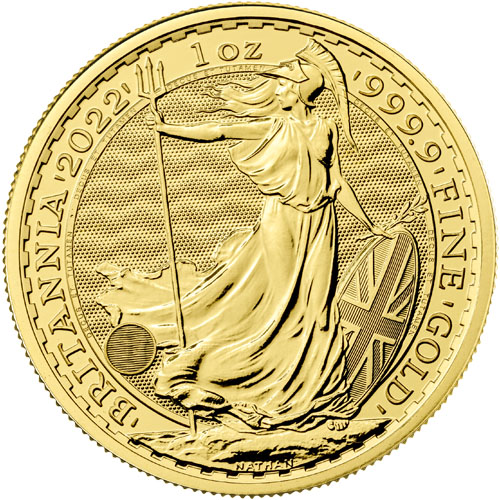 Introduced in 1987, the Gold Britannias from the Royal Mint are a standard-bearer for Britain in the global precious metals field. The coins were initially introduced with 22-karat gold content, but as of 2013 feature 24-karat gold content. In 2021, the series was further enhanced with the addition of four security elements on the reverse of the coins. Now, 2022 1 oz Gold British Britannia Coins are available to you for purchase online from Silver.com.

The reverse side of all 2022 Gold Britannias comes with those same security features. The background field has a wave-motion texture that changes as you adjust your viewing angle. The included latent security circle also changes as you adjust your viewing angle, changing from a padlock to a trident. The design field has a micro-text engraving around it and there are tincture lines on the Union Jack shield.

The obverse field of 2022 1 oz Gold Britannias features an effigy of Queen Elizabeth II. Her Majesty is captured here in right-profile relief at the age of 89 wearing the George IV State Diadem Crown. The design serves as the fifth-generation portrait of the Queen on British coins and was developed in 2015 by Jody Clark.

On the reverse side of 2022 Gold British British Britannias is an image of Britannia. The female allegory representing both Britons and the British Isles, she is shown in an aggressive design that showcases her as the defender of the realm. Ready for peaceful defense, she clutches the Union Jack shield and an olive branch in her left hand. Prepared to go on the offensive, she also holds a trident in her right hand.

These 2022 1 oz Gold British Britannias are offered to you in Brilliant Uncirculated condition. Coins in this weight come with individual flips, tubes of 10 coins, or boxes of 100 coins that include 10 tubes of 10 coins each.

Silver.com customer service is available to you on the phone at 888-989-7223. We are also available online using our live chat and email features.