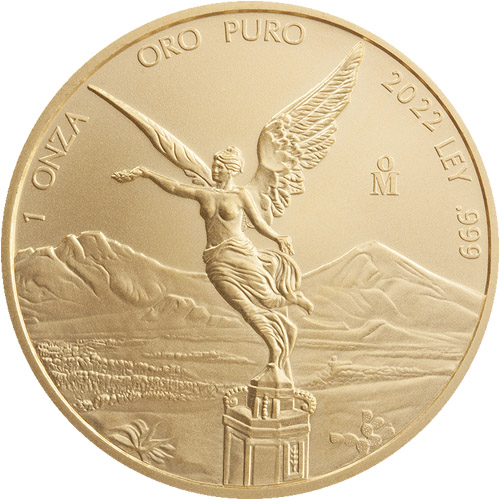 One of the more popular gold bullion coins available to investors comes from the Mexican Mint. Introduced in 1981, the Gold Libertad is based on a coin that the Mexican Mint first issued in 1921 in honor of the centennial of the nation’s independence from Spain. Now, 2022 1 oz Gold Mexican Libertads are available to you for purchase online from Silver.com.

While the Gold Mexican Libertad has been available since 1981, its production history has been a story of stops and starts. Though the coins debuted in 1981, that year would prove to be a one-time release. The coins were not issued again until 1991, with this release featuring a four-year run through 1994.

In the obverse design of the 2022 Gold Libertad, the mint features the national coat of arms of Mexico. The design shows a Mexican golden eagle in left-profile relief with raised wings and a serpent in its beak and talons. The eagle is perched on a prickly pear cactus and the seal is surrounded by 10 historic versions of the national seal.

These 2022 1 oz Gold Mexican Libertads are available to you for purchase individually or in bulk. These gold coins come in either plastic flips or protective tubes of 10 coins. All coins are in Brilliant Uncirculated condition.