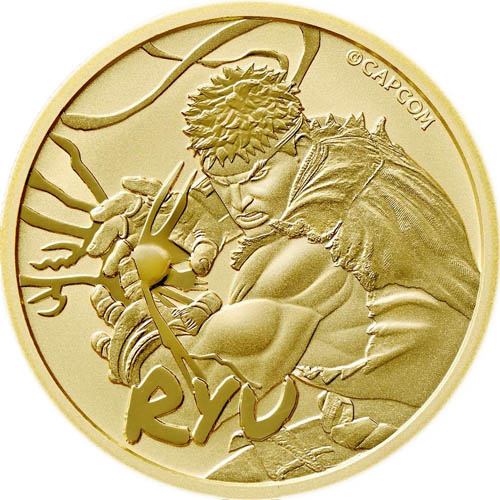 The new Street Fighter Character Series from Tuvalu, Capcom, and the Perth Mint features distinct designs of the famous characters from the fighting game franchise. First up in the series is arguably one of the most popular characters from the games, Ryu. The coins in this series will come with 1 oz silver and 1 oz gold BU options as the primary releases. Now, 2022 1 oz Gold Tuvalu Street Fighter Ryu Coins are available to you for purchase online from Silver.com.

Ryu debuted in the very first game of the franchise, Street Fighter, which was released in August 1987. The iconic arcade franchise celebrates its 35th anniversary in 2022 and Capcom has authorized the use of images of various characters for a number of different celebratory coin programs.

In this series from Perth Mint, Ryu is the first character depicted, and with good reason. Ryu is one of the lead characters from the first game and often appears alongside his best friend, Ken Masters. Ryu is a character who is intensely focused on training with the goal of becoming the strongest fighter he can be.

The obverse of 2022 1 oz Gold Tuvalu Street Fighter Ryu Coins features a portrait of Queen Elizabeth II. England’s longest-reigning monarch and the head of the Commonwealth, Elizabeth II features here in right-profile relief in the 1998 design from Ian Rank-Broadley. This effigy shows the Queen with the Girls of Great Britain and Ireland Tiara.

On the reverse side of 2022 Gold Tuvalu Street Fighter Ryu Coins, you will find an artistic rendering of Ryu. Though the Street Fighter franchise was groundbreaking at the time, it was not the first fighting game. In fact, it was inspired by developer Takashi Nishiyama’s 1984 game, Kung-Fu Masters, and Ryu’s character was Mas Oyama, a real-life karate master who founded Kyokushin Karate.

These 2022 1 oz Gold Tuvalu Street Fighter Ryu Coins are available to purchase with individual acrylic capsules and a Certificate of Authenticity. The included COA has a unique serial number for each coin within the 100-coin mintage, and all of the coins in this release come in Brilliant Uncirculated condition.