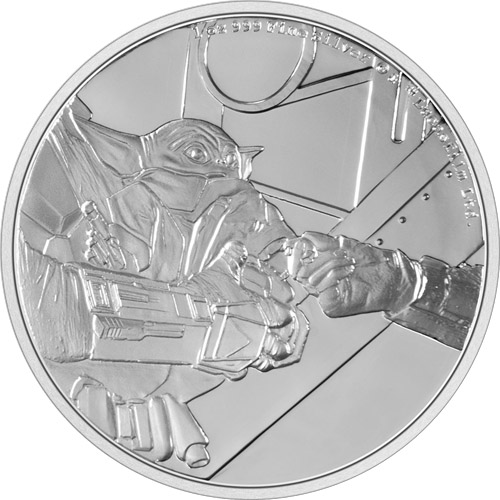 The Mandalorian debuted on Disney Plus in November 2019 and introduced Star Wars fans to a slew of new characters. Though there were plenty of human actors in these roles, the most delightful character introduced in the series was Grogu, a toddler from the same species of aliens as Yoda. Today, 2022 1 oz Proof Silver Niue Mandalorian Grogu Coins are available to you online at Silver.com.

The storyline in The Mandalorian is set five years after the feature film Return of the Jedi. It drops you into a galaxy in which the Galactic Empire has fallen. Din Djarin is a Mandalorian bounty hunter who exists in the outer reaches of the galaxy. The remnant units of the Imperial Army have hired him to retrieve The Child, the name these Imperial forces use to refer to Grogu.

All of the 2022 1 oz Proof Silver Niue Mandalorian Grogu Coins come with presentation packaging from the New Zealand Mint. The coins are individually housed in black cases from the mint with a pop-up base that allows you to display the coin upright inside the box. The coin and its display box come with a themed shipper that includes a Certificate of Authenticity. On the COA, you will find the unique serial number within the series assigned to this coin. As a proof coin, these specimens have frosted designs and mirrored fields.

On the obverse of 2022 Silver Niue Mandalorian Grogu Coins is a depiction of Queen Elizabeth II. In this design from 1998, Her Majesty is shown in right-profile relief wearing the Girls of Great Britain and Ireland Tiara on her head. The design was created by Ian Rank-Broadley at that time for the Royal Mint to serve as the fourth-generation portrait for British coinage.

The reverse side of 2022 1 oz Silver Mandalorian Grogu Coins features an image of The Child. Also known as The Asset or The Kid, Grogu was often mistaken by those who first saw the series as a baby version of Yoda. In reality, he is the same species of unnamed alien as Yoda, but is not one in the same.

Please contact Silver.com with questions about 1 oz silver coins. You can call us at 888-989-7223, chat with us live online, or email us directly.