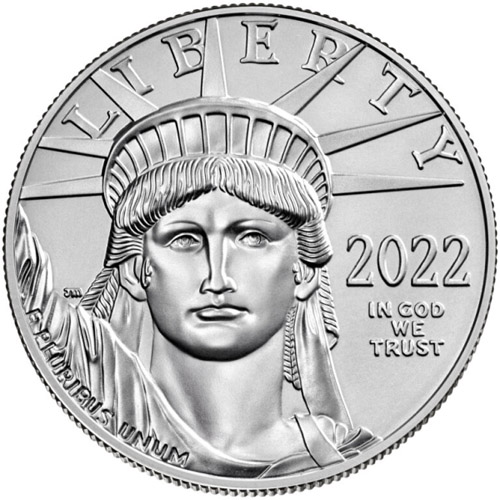 In 1997, the United States Mint introduced the Platinum American Eagle as the third bullion version of the American Eagle coins. The coins were issued from 1997 to 2008 in both BU and Proof versions. Initially, the coins were available in both versions with 1 oz, 1/2 oz, 1/4 oz, and 1/10 oz platinum weights.

The obverse side of 2022 1 oz Platinum American Eagles comes with an effigy of the Statue of Liberty. This design was created in 1997 for this series by John Mercanti and shows the head of the statue within the design field of the coin.

On the reverse face of 2022 Platinum American Eagles is an American bald eagle. Created in 1997 by Thomas D. Rogers, this image shows a bald eagle gliding through the air as the sun crests the horizon in the background field of the coins.