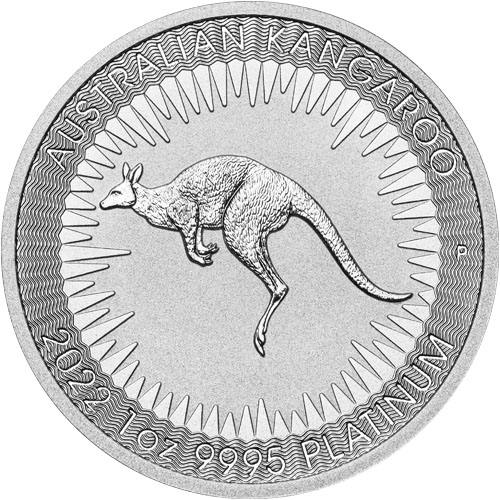 Already one of Australia’s most popular and oldest bullion coin collection, the Australian Kangaroo also became one of the most complete coin collections from Perth Mint in 2018. This year marked the second expansion of the series in just three years as the mint followed the debut of the new Silver Kangaroo in 2016 with a Platinum Kangaroo in 2018. Now, 2022 1 oz Platinum Australian Kangaroos are available to you for purchase online at Silver.com.

In 1986, the Perth Mint introduced a coin series then known as the Gold Nugget. These gold bullion coins would feature a different reverse design for each weight, but use that same image each year on those varying weights. In 1990, Perth altered the series focus to the kangaroo to coincide with the release of the new Silver Kookaburra.

On the reverse side of 2022 Platinum Australian Kangaroos is Stuart Devlin’s depiction of the kangaroo. Specifically, this design captures a specimen from the red kangaroo subspecies as it hops from right to left across the design field with stylized sun rays in the background.

These 2022 1 oz Platinum Australian Kangaroos are available to you individually or in bulk. Individual platinum coins come in acrylic capsules, with protective tubes for multiples of 20 coins or boxes for multiples of 100. The boxes hold 5 individual 20-coin tubes. All coins are in Brilliant Uncirculated condition. An unlimited mintage at Perth means these coins will be struck to meet demand into 2022 until the point the mint begins to issue the 2023-dated coins.

Silver.com customer service can assist you at 888-989-7223. We are also available to you online through our live chat and email address features.