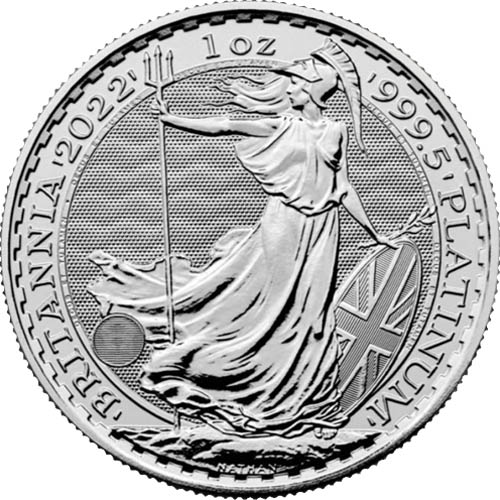 The Royal Mint’s Britannia Series is a popular collection with investors and collectors. While the proof versions in the series offer new images of Britannia in select years, the BU coins have the same stirring rendition of Britannia on the reverse with each release dating all the way back to 1987 when the series started. Right now, 2022 1 oz Platinum British Britannia Coins are available to purchase online at Silver.com.

Each 2022 1 oz Platinum British Britannia available here comes with either individual or bulk packaging based on the number of coins you purchase. Individual coins arrive in protective flips. Multiples of five to 10 coins ship in an acrylic tube, with multiples of 100 offered in a box. When full, the box holds 10 individual 10-coin tubes. All of the coins are in Brilliant Uncirculated condition.

British Britannias debuted in 1987 with the release of gold bullion coins. The series offers both 1 oz and fractional-ounce weights in the gold series, as well as the silver series that was introduced a decade later in 1997. More than two decades later, the mint introduced these platinum coins with 1 oz and 1/10 oz options available to investors.

The obverse side of 2022 Platinum British Britannias comes with a portrait of Queen Elizabeth II. This design was created in 2015 by Jody Clark and shows the Queen at the age of 89. For this portrait, the Queen is shown wearing the George IV State Diadem, one of the official pieces from the Crown Jewels.

On the reverse face of the 2022 1 oz Platinum Britannia is an image of Britannia, the female personification of Britain. In this stirring design, she is shown standing along a coastline with a large shield in her left hand. Her left hand rests on this shield, which is emblazoned with the Union Jack, as it clutches an olive branch. Wearing a long gown and a Corinthian helmet, she wields a trident in her other hand.