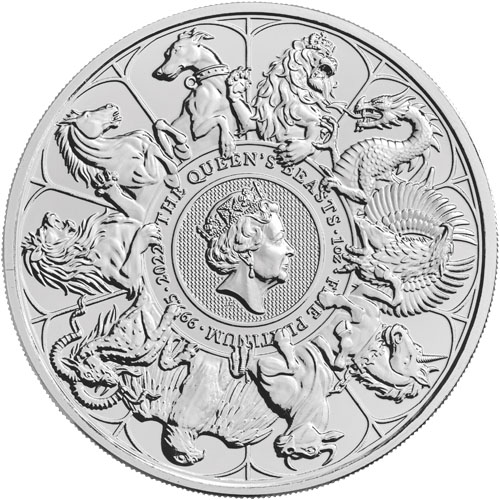 With the release of new designs now complete, the mint offers one last chance to own the 10 heraldic beasts from the series in a single release. The Queen’s Beast Collection coins are offered in BU condition with gold, silver, and platinum coins available to those who have been following this series over the years, or those just discovering this collection.

On the obverse of 2022 1 oz Platinum British Queen’s Beast Collection Coins is an effigy of Her Majesty, Queen Elizabeth II of England. The longest-reigning monarch in British history, Elizabeth II features here in the fifth-generation portrait of her reign. Created in 2015 by Jody Clark, this design has graced British coins since 2016.

The reverse side of the 2022 Platinum Queen’s Beast Collection Coin comes with the same effigy of the Queen set at the center in a smaller format. Around Her Majesty, all 10 of the heraldic beasts from the series are featured along the edge of the design element.

These 2022 1 oz Platinum Queen’s Beast Collection Coins are available to you in plastic flips, protective tubes of 10 coins, or boxes of 100 coins. All of the coins are in Brilliant Uncirculated condition.