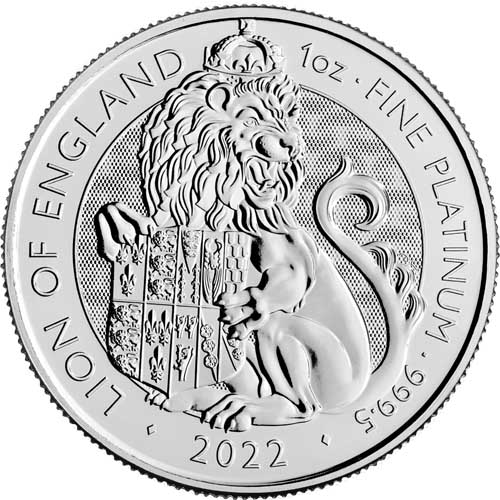 The Royal Mint offers fans of the monarchy and history buffs a second series of beautiful designs to follow up its Queen’s Beast Series. The new Tudor Beasts Series offers designs reflective of the monarchs from the Tudor Dynasty. Now, 2022 1 oz Platinum British Tudor Beasts Lion Coins are available to you for purchase online from Silver.com.

The Tudor Dynasty was formed in the aftermath of the Wars of the Roses between the House of Lancaster and the House of York. After struggling for control of the throne for decades, Henry Tudor’s forces ended the conflict with the defeat and killing of King Richard III, the last Yorkist king.

Henry Tudor married Elizabeth of York to merge the houses and form the House of Tudor. He ruled as the first monarch of the dynasty, with his second son and his granddaughter carrying on the Tudor banner for most of the next century. King Henry VIII had a tumultuous reign, while his daughter, Queen Elizabeth I, reigned for decades into the 17th century and reigned over a golden era in English history.

The obverse side of 2022 1 oz Platinum Tudor Beasts Lion Coins comes with a portrait of Queen Elizabeth II. In this design, Her Majesty is shown in right-profile relief at the age of 89 with the George IV State Diadem Crown on her head. The design was created in 2015 by Jody Clark.

These 2022 1 oz Platinum British Tudor Beasts Lion Coins are available to you individually in protective flips. Multiples come in plastic tubes of 10 coins or boxes of 100 coins. The box holds a total of 10 tubes of 10 platinum coins each. The release of the Lion of England is the first BU coin available in the Tudor Beasts collection.

Silver.com customer service is available at 888-989-7223. Additionally, our team is available online using our live chat and email address features.