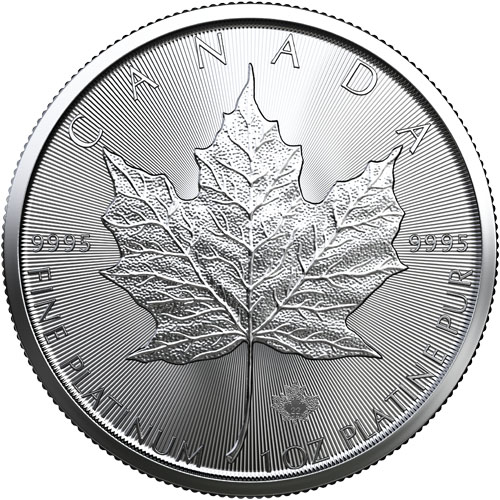 Platinum Canadian Maple Leafs remain one of the longest-running platinum coins in the world today. Despite the halt in production that saw no coins issued from 2004 to 2008, the Platinum Maple Leaf enjoys visibility in the market and popularity among investors that puts it alongside platinum coins from other mints around the world.

The obverse of 2022 1 oz Platinum Canadian Maple Leafs features a right-profile portrait of Queen Elizabeth II. In this design, Her Majesty is shown without a crown. This is a first during her reign and a first for a monarch portrait on Canadian currency since the reign of her father, King George VI.

These 2022 1 oz Platinum Canadian Maple Leafs are available in Brilliant Uncirculated condition. Coins in this listing come with either individual flips for shipping or acrylic tubes of 10 coins.

Silver.com customer service is available at 888-989-7223. Additionally, you can reach us online through our live chat and email address features.