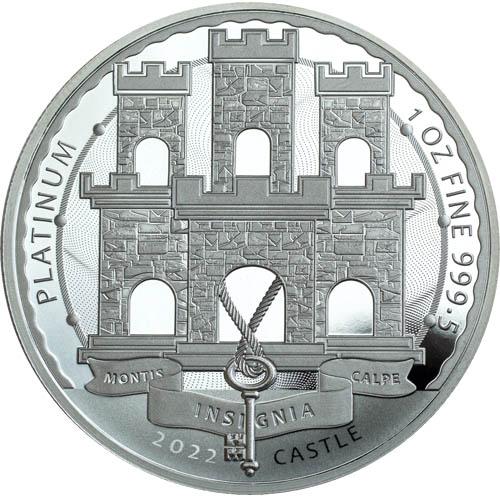 The range of platinum coins available to investors continues to grow in the 21st century as platinum sees a rebound in bullion demand. Among the newest 1 oz platinum coins you will find available is the Royal Arms of England Gibraltar Series, a unique release that includes the coat of arms of Gibraltar. Today, 2022 1 oz Platinum Gibraltar Castle Coins are available to you online at Silver.com.

All of the 2022 1 oz Platinum Gibraltar Castle Coins available here come with proof-like visuals. The coins are packaged individually inside protective plastic flips. Coins in this release feature the Pound denomination of Gibraltar, a separate denomination from the Pound sterling of the United Kingdom. You can also receive coins in tubes for multiples of 20 or Monster Boxes for multiples of 500.

On the obverse side of 2022 Platinum Castle Coins is a depiction of the Royal Arms of England. The official seal of the monarchy, this emblem is carried today by Queen Elizabeth II. At the center of the design is the coat of arms of the United Kingdom, a quartered shield that includes the individual coats of arms for England, Scotland, and Northern Ireland. The shield is topped by the Imperial Crown, with the Lion of England and Unicorn of Scotland supporting the seal.

The reverse face of 2022 1 oz Platinum Gibraltar Castle Coins comes with the coat of arms of Gibraltar. This design dates back to 1502 and was granted by a Royal Warrant by Isabella I of Castile, the Queen of Spain. The seal includes a castle with a key hanging from the front. The motto of Gibraltar features in Latin beneath the seal.

Please feel free to contact Silver.com with any questions. Our team is available at 888-989-7223, online using our live chat, and through our email address.