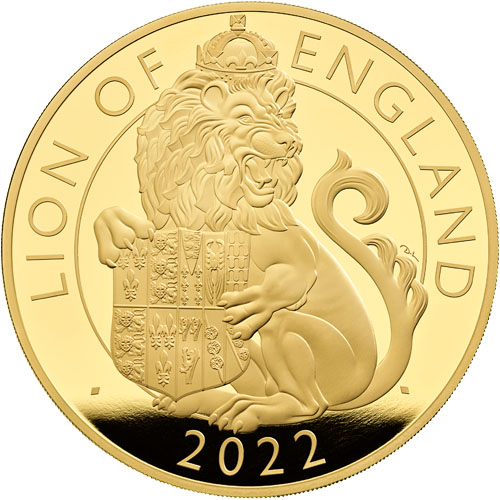 In the new Tudor Beasts Series, the Royal Mint of England focuses on the heraldic beasts used by the monarchs of the Tudor dynasty. The Tudors ruled the throne of England from 1485 until 1603. The series offers a particular focus on ten stone statues that line Moat Bridge at the entrance to Hampden Court Palace. Among those statues is the mighty Lion of England. Now, 2022 1 oz Proof Gold British Tudor Beasts Lion of England Coins are available to you for purchase online from Silver.com.

The Lion of England is, without question, the most important and prominent heraldic beast in the history of England. The symbol was used by monarchs in England prior to the Norman invasion, with Anglo-Saxon kings and Danish raiders both using lions in personal badges and emblems as early as the 9th century in England.

It was the rise of the Plantagenets in the 12th century that eventually brought the first official Royal Arms of England. King Richard I used a lion in his personal badge and military emblems, and it was later adopted in 1198 during the final years of his reign as the signature beast of the Royal Arms of England.

Queen Elizabeth II is on the obverse side of 2022 Proof Gold Tudor Beasts Lion of England Coins. This effigy of the Queen is the fifth-generation portrait of Her Majesty on English coins and it was created in 2015 by Jody Clark.

In the reverse design of 2022 1 oz Proof Gold Lion of England Coins, the Royal Mint features a design from David Lawrence featuring the Lion of England. The design shows a shield with the impaled arms of King Henry VIII and Jane Seymour, with the crowned Lion of England seated behind the shield in support.

These 2022 1 oz Proof Gold British Tudor Beasts Lion of England Coins are available to you inside protective capsules. The coin and capsule arrive in a wooden presentation box with a base that can be shifted into an upright position to better display your coin. Each 1 oz gold coin comes with a Certificate of Authenticity and proof visuals that include frosted designs over mirrored fields.