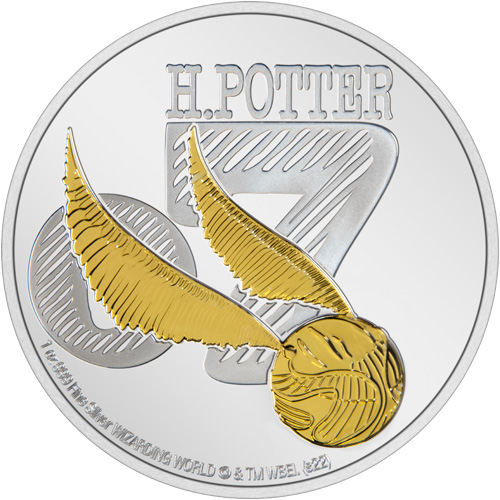 Harry Potter has proven to be one of the most popular fantasy genres in recent memory. Based on the novels of J.K. Rowling, the franchise went on to release on the big screen as an eight-film franchise that drew in more followers of the exploits of Harry Potter and his wizarding friends. One of the more relatable parts of the franchise was the game Quidditch, a sporting competition played by amateurs and professionals alike. Now, 2022 1 oz Silver Niue Harry Potter Classic Golden Snitch Coins are available to you for purchase online at Silver.com.

Quidditch matches are played by the students of Hogwarts with teams comprised of students from each of the four houses at Hogwarts. Two teams competed at a time, with the biggest rivalry at the school being that between Gryffindor and Slytherin, though all four houses would compete against one another at varying points in time.

A Quidditch match consists of two teams of seven players each facing off on a large, oval pitch with three goals shaped like rings set at different heights on each side of the pitch. The teams consist of three chasers, two beaters, a keeper, and the seeker. It is the job of the seeker to catch the golden snitch. Doing so results in 150 points and an automatic victory for the team that does so.

The obverse of 2022 Silver Niue Classic Golden Snitch Coins comes with an effigy of Queen Elizabeth II. Her Majesty is shown here in right-profile relief wearing the Girls of Great Britain and Ireland Tiara. The design was created in 1998 by Ian Rank-Broadley for the Royal Mint of England as the fourth-generation portrait of the Queen.

On the reverse of the 2022 1 oz Silver Harry Potter Golden Snitch Coin is a depiction of the golden snitch from Quidditch. The snitch is depicted with a gilded gold finish, with Harry Potter’s name and number from his uniform featured within the design element.

These 2022 1 oz Silver Niue Harry Potter Classic Golden Snitch Coins are available to you with presentation packaging. The coins are encapsulated inside wooden display boxes with a Certificate of Authenticity included within the themed shipper. The COA has a unique serial number for each coin featured on it.

Silver.com customer service is available at 888-989-7223. Our team is also available online through our live chat and email address features.