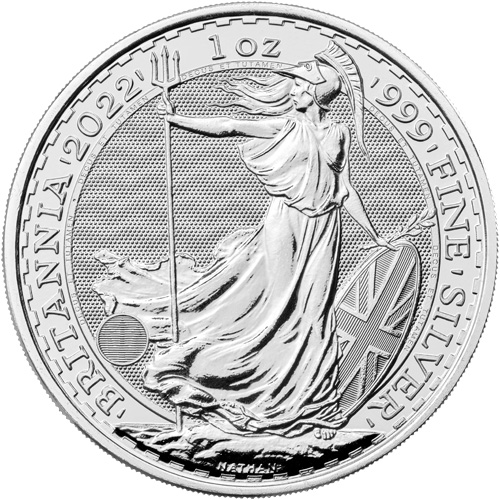 One of the world’s most popular silver coins for sale, the Silver British Britannia has been released by the Royal Mint of England since 1997. The series features the same designs on the obverse and reverse as the Gold Britannia, with four new security features included on the coins as of 2021. Right now, 2022 1 oz Silver British Britannias are available to purchase online at Silver.com.

Silver Britannia and Gold Britannia Coins are available as of 2021 with four enhanced security features. The features are all within the reverse field of the coins. Two of these features change as you adjust your viewing angle for the coin. The background field offers a motion element that mimics the movement of waves on the ocean. The small, circular latent security element changes from the image of a padlock to a trident head. On the Union Jack shield, there are now tincture lines throughout the flag. There is a micro-text engraving around the image of Britannia.

The obverse side of 2022 Silver Britannia Coins is a portrait of Queen Elizabeth II. Her Majesty is shown here in right-profile relief with the George IV State Diadem Crown on her head. This effigy shows the Queen at the age of 89 and a design that Jody Clark created for the mint in 2015. The design field includes a guilloche visual element in the background field.

On the reverse face of 2022 1 oz Silver British Britannias is Philip Nathan’s depiction of Britannia. The female allegory representing Britain and British people, Britannia first appeared on coinage in the British Isles during the 1st century AD and the reign of the Roman Empire. This design was created in 1987 and continues the modern use of Britannia on British coins that dates to the late-17th century.