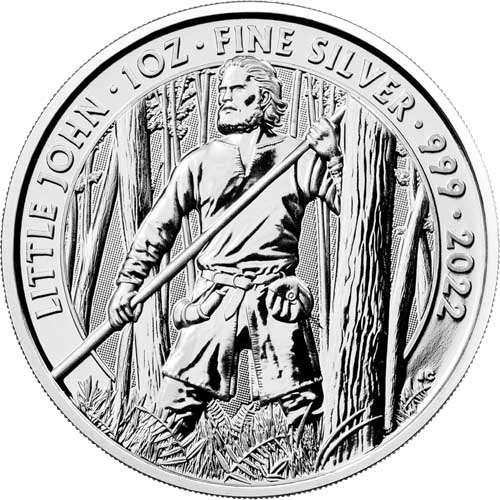 The folktale regarding Robin Hood and his band of Merry Men is one that has persisted in English culture for more than 800 years. The cast of characters that surround Robin in his adventures is generically referred to as the band of Merry Men and includes plenty of nameless, faceless companions. However, there are also some characters as rooted in the folklore as Robin himself. Little John is one of those deeply-rooted characters. Now, 2022 1 oz Silver British Little John Coins are available to you for purchase online at Silver.com.

Little John is one of the two oldest supporting members in the band of Merry Men, with the other known as Much the Miller’s Son. Little John and Robin Hood are often depicted as inseparable figures whose friendship brings them together into the band of outlaw bandits living in Sherwood Forest.

Obverse designs on the 2022 1 oz Silver British Little John Coins include a portrait of Queen Elizabeth II. The longest-reigning monarch in British history and the only one to ever celebrate a Platinum Jubilee, Her Majesty is shown in this 2015 design at the age of 89 wearing the George IV State Diadem Crown.

Reverse imagery on 2022 Silver British Little John Coins features the imposing figure of Little John. In the earliest written records of Little John as one of Robin Hood’s companions, he is referred to as a skilled fighter and a cunning individual. His name is a play on words, for though he is known as Little John, most references state he is 7 feet tall and uses a long quarterstaff as his primary weapon.

These 2022 1 oz Silver British Little John Coins come in protective flips for individual coins. Multiples are packaged in plastic tubes of 25 or Monster Boxes of 500. The Monster Box holds 20 tubes of 25 coins each. All coins are in Brilliant Uncirculated condition.

Silver.com customer service is available at 888-989-7223. You can also ask questions when buying silver using our live chat and email address features.