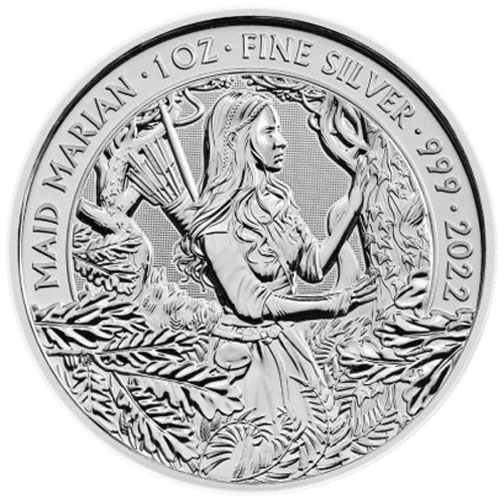 The Medieval tales of the British rogue known as Robin Hood cover the exploits of a talented archer and his band of merry men. However, there is one very prominent female figure in this storyline that plays an important role in Robin’s crusade to help the poor: Maid Marian. The Royal Mint’s Myths and Legends Series gives Maid Marian attention in the second release of the three-coin collection. Now, 2022 1 oz Silver British Maid Marian Coins are available to you for purchase online at Silver.com.

Maid Marian is the only female figure mentioned in the folktales surrounding Robin Hood. In the earliest versions of the story during the Medieval period, she is not mentioned. However, by the 1600s, Maid Marian had made her way into the stories surrounding Robin Hood. While she is often depicted as his love interest, she also plays a more important role than simply being a love interest.

Many versions of the Robin Hood tale paint Maid Marian as a woman of higher standing in society. While she is most commonly portrayed as using this status to gain valuable information to pass along to Robin Hood and his men, she is also depicted in some versions of the tale as a more active participant. As this new design suggests, she knew how to handle herself in Sherwood Forest as well.

The obverse of 2022 1 oz Silver British Maid Marian Coins features a portrait of Her Majesty, Queen Elizabeth II. The Queen is shown here in right-profile relief in the fifth-generation design created in 2015. She is aged 89 years in this visual with the George IV State Diadem on her head in this portrait.

On the reverse side of 2022 Silver British Maid Marian Coins is a depiction of Maid Marian. She is shown amidst the thick foliage of Sherwood Forest stealthily on the lookout for the men of the Sheriff of Nottingham. While she may be playing the role of spy, she is more than ready to defend herself, as you can see in the quiver full of arrows on her back.

Silver.com customer service is available at 888-989-7223 to assist with questions about silver for sale. We are also available online using our live chat and email address features.