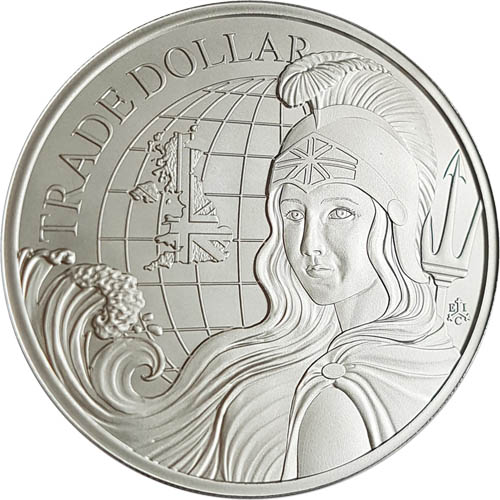 The original British Trade Dollar was minted from 1895 to 1935 to advance trade with China and various British colonies. Previously, the Spanish silver dollar had been the currency standard for Eastern trade. However, fears of dwindling supply led Britain to mint its own coin to facilitate trade in these regions. Today, 2022 1 oz Silver British Trade Dollar Coins are available to you online at Silver.com.

All 2022 1 oz Silver Trade Dollar Coins are delivered in Brilliant Uncirculated condition. This means that these coins will be in nearly flawless condition. When shipping these Trade Dollars, each one is packaged inside a plastic flip for protection. All orders are fully insured in while in transit, as well.

Trade dollars have been minted in various countries, including China, France, the United States, and the United Kingdom. The British Trade Dollar was designed by William De Saulles to help with trade between the UK, China, and the Straits Settlements. The original design showcases the female personification of Britain known as Britannia and includes Chinese inscriptions along the edge. Production for this coin ceased in 1935, and it was officially demonetized in 1937.

Queen Elizabeth II features on the obverse of 2022 1 oz British Trade Dollar Coins. This effigy by Jody Clark was completed for the Royal Mint in 2015. It depicts Her Majesty in right-profile relief wearing the George IV State Diadem the Queen wore at her coronation. She is also wearing the Coronation Necklace of 1858. The coin’s hallmarks are inscribed along the rim.

Britannia is depicted on the reverse of 2022 Silver British Trade Dollar Coins. The female personification of Britain is shown wearing a crested helmet with a visor featuring the flag of the United Kingdom. We also see her trident, which symbolizes British maritime activity, as well as the map of the UK. Along the edge are the words Trade Dollar, as well as the East India Company’s initials.

Please don’t hesitate to contact Silver.com with any questions when buying silver. You can call us at 888-989-7223, chat with us live online, or simply send us an email with your inquiries.