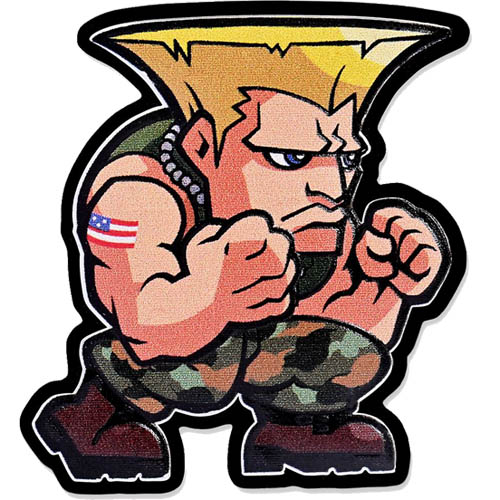 Guile is a popular character from the Street Fighter video game series. Though the franchise kicked off in 1987, Guile didn’t show up until Street Fighter II in 1991. Known for his blonde hair and muscular frame, Guile is a member of the United States Air Force whose main goal is to destroy the evil organization known as Shadaloo. Today, 2022 1 oz Silver Fiji Street Fighter Series Guile Shaped Coins are available to you online from Silver.com.

When you purchase 2022 1 oz Silver Street Fighter Series Guile Shaped Coins in this online listing, you will receive a coin housed inside a presentation box with a themed shipper and Certificate of Authenticity. These collectible coins are colorized and minted in the shape of fan-favorite character Guile.

The national arms of Fiji are shown on the obverse of 2022 1 oz Street Fighter Series Guile Shaped Coins. A shield is shown in the center propped up by a pair of Fijian warriors. The crest consists of a traditional Fijian canoe, and below the design is the country’s motto. Inscriptions on the obverse read Fiji 2022, 1 oz .999 Fine Silver 1 Dollar. The Capcom logo is also shown, as well as the coin’s individual serialized number.

The Street Fighter character named Guile is shown on the reverse side of these 2022 1 oz Silver Fiji Street Fighter Series Coins. He appears ready for action with both fists raised in the air. Just like in the game he is wearing a sleeveless shirt to showcase his extraordinary muscles. Across one arm is an American flag tattoo.

Street Fighter is a classic video game in which a set of characters fight until one of them is defeated. Players are allowed to choose from a wide roster of fighters, each of which have their own unique moves. Game strategies involve knowing the moves of each character and which buttons to press in order to perform them. While the game was originally designed for arcades, it has since become available on computers and the most popular game consoles.

Please contact Silver.com if you have any questions when you buy silver online. You can call us at 888-989-7223, chat with us live online, or email us directly.