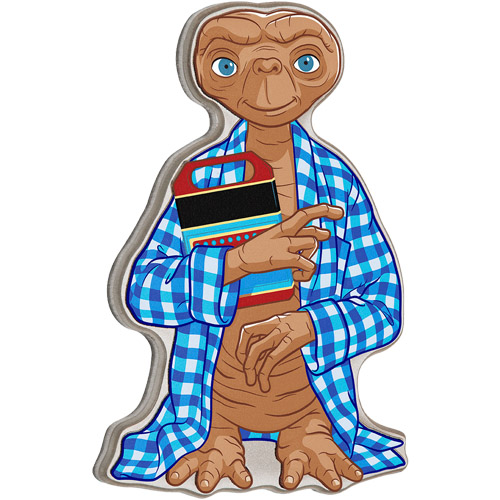 Widely regarded as one of the best films of all time after its blockbuster release in 1982, E.T.: The Extra-Terrestrial was near-universally praised by critics and filmmakers and became the first movie to displace Star Wars from its spot as the highest-grossing film of all time. Commemorating the fortieth anniversary of this extraordinary cinematic event, the 2022 1 oz Silver Colorized Niue 40th Anniversary E.T. Shaped Coin is now available in an exclusive limited mintage through Silver.com.

The 2022 Silver Colorized Niue 40th Anniversary E.T. Shaped Coin is available in a Gem Brilliant Uncirculated finish produced by a superb quality strike, marking it out as an elite limited-edition coin that’s sure to be avidly sought out by collectors and fans of the timeless classic movie. Silver.com ships it in a themed box with an acrylic protective capsule, a large display window, and its own Certificate of Authenticity. All shipments are fully insured. but you’ll need to order early before the limited supply of this exclusive run is gone.

According to director Steven Spielberg, the idea of E.T. was born from his own memories of an imaginary friend he had as a child, during the stressful time of his parents’ divorce. The film’s gentle and affable alien botanist, accidentally cut off from his crew and spaceship, reflects those roots in the touching relationship he develops with a boy and his friends and family in an American suburb, all of whom pull together to help him “phone home.” It’s known for some of the most iconic scenes in cinematic history, and for creating one of movies’ most iconic characters in the form of E.T. himself.

The coin’s reverse is a detailed and colorized sculpture of E.T. wrapped in an oversized human shirt, carrying the Speak-n-Spell he uses to communicate with his new human friends.

The obverse features a Public Seal of Niue identifying the coin as legal tender of that nation. It bears the inscriptions “Niue,” “2022,” “Two Dollars,” and “1 oz SILVER .999,” along with the Universal City Studios copyright.

Silver.com’s customer service department is standing by to answer your questions about silver bullion at 888-989-7223. You can also reach out via online live chat or send inquiries to our e-mail address.