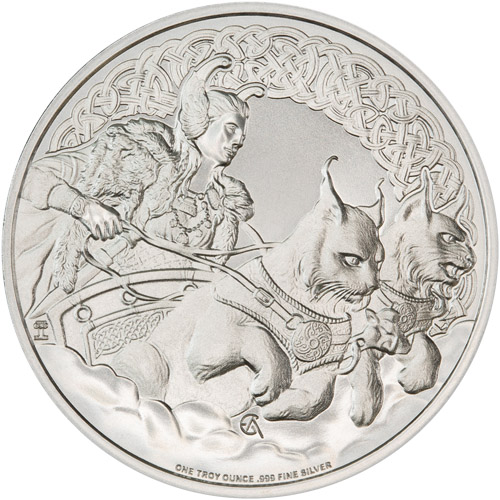 There are few design concepts as popular these days as the deities from Norse mythology. These designs include images of the three most popular gods and three most popular goddesses. From silver and copper rounds to collections of bullion coins, fans of Norse mythology have a new series available courtesy of the Intaglio Mint. Now, 2022 1 oz Silver Niue Norse God Series Freya Coins are available to you for purchase online from Silver.com.

Freya’s name in ancient scripts is spelled as Freyja and translates from Old Norse as simply “Lady.” She is one of the most renowned goddesses from Norse mythology and is said to be the sister of Freyr. Freya is associated with love and fertility, as well as battle and death.

Though she is associated with love, Freya is perhaps best known for her association with the Valkyrie, the warrior maidens who serve Odin. Freya, as well as other members of the Valkyrie, ride in the skies over human battlefields to select from among the honorable dead who will go to Valhalla with Odin and who will join Freya at her great hall of Folkvangar.

The obverse side of the 2022 Silver Niue Norse God Series Freya Coin features a portrait of Queen Elizabeth II. In this stirring right-profile depiction of Her Majesty, the record-breaking English monarch is shown with the George IV State Diadem Crown. Elizabeth II ascended to the throne in 1952 upon the death of her father, King George VI. As of 2022, she is well beyond the record for British monarchs and became the first-ever British monarch to celebrate a Platinum Jubilee in 2022.

On the reverse field of 2022 1 oz Silver Norse God Series Freya Coins, you will find an image of the goddess known as Freya. She is shown here amidst the clouds as she rides through the sky in her chariot driven by a pair of cats.

These 2022 1 oz Silver Niue Norse God Series Freya Coins are available individually inside plastic flips. Multiples come in either protective tubes of 20 coins or boxes of 500 coins. Each box can hold 25 tubes of 20 coins each.

Silver.com customer service is available at 888-989-7223. Alternatively, our team is available online through our live chat and email address features.