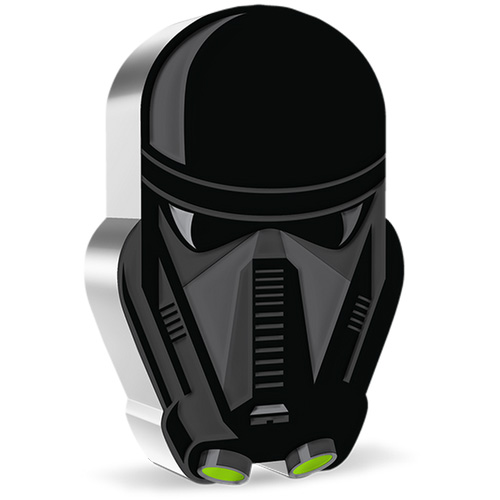 The New Zealand Mint’s Faces of the Empire Series is an impressive collection that should be a must-have series of silver coins for any Star Wars fan. The collection offers distinctive shapes for each coin release and comes with colorized visuals. Each new design captures the helmet of a different figure from the Empire, from fighter pilots to various iterations of the Imperial Stormtrooper. Today, 2022 1 oz Silver Niue Faces of the Empire Death Trooper Shaped Coins are available to you online at Silver.com.

In the Faces of the Empire Series, the New Zealand Mint has focused on giving collectors a closer look at the helmets of some of the most common background characters from the Star Wars franchise. In nearly every film within the franchise, you get a look at the Stormtroopers that serve the empire. While they seem identical throughout, there are variations within the gear and uniforms of Stormtroopers, and there are also different uniforms for pilots serving the Empire. Death Troopers are among the elite of the Galactic Empire.

All of these 2022 1 oz Silver Niue Faces of the Empire Death Trooper Shaped Coins are available to you in a custom-shaped case. This case is housed in a themed shipper that has a clear viewing window on the front. The coin is packaged with the reverse field facing out in the case so you can see it at all times through the viewing window. The themed shipper comes with a Certificate of Authenticity and a holographic sticker with the individual serial number assigned to each piece.

On the obverse of 2022 Silver Niue Death Trooper Shaped Coins is an effigy of Queen Elizabeth II. Her Majesty is shown here in right-profile relief with the Girls of Great Britain and Ireland Tiara. This design was created in 1998 by Ian Rank-Broadley and first featured on British coins from 1998 to 2015.

Please contact Silver.com with any questions about these 1 oz silver coins. You can call us at 888-989-7223, chat with us live online, or simply send us an email with your inquiries.