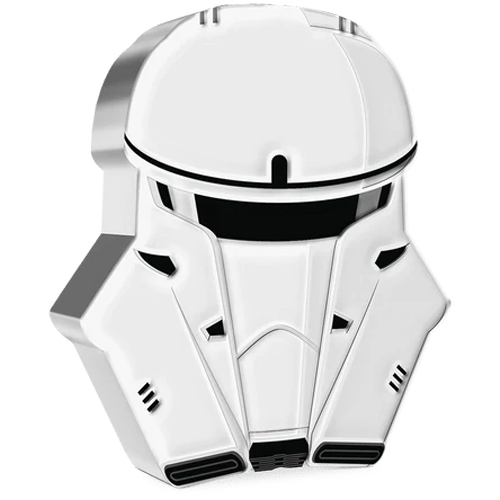 The 2022 1 oz Silver Niue The Faces of the Empire Hovertank Pilot Shaped Coin is the latest addition to the New Zealand Mint’s Faces of the Empire collection. It’s a tribute to a recent addition to the vast roster of villains and henchmen employed by the Galactic Empire in the faraway space opera Star Wars franchise, expertly crafted and shipped ready to display and a must-have for both fans and collectors.

Silver.com ships the 2022 1 oz Silver Niue The Faces of the Empire Hovertank Pilot Shaped Coin to you in a themed display case ready for showing as part of your collection, further secured inside a custom-made acrylic protective capsule that lets you handle it with confidence upon arrival. Each coin’s unique number in the mintage is displayed on the inside of its case, and your shipment is fully insured.

The Star Wars franchise is famous for its inventive character design and ability to constantly revise and expand its universe, and the Imperial Hovertank Pilot commemorated by this coin is a perfect example. Making their first appearance in the 2016 film Rogue One: A Star Wars Story, these sleek and sinister specialists among the ranks of the Galactic Empire’s stormtroopers were introduced in thrilling action scenes that established their look as an instant classic and fan-favorite addition to the franchise.

The chilling-but-stylish design of the hovertank pilot’s helmet forms the reverse side of this shaped coin, which despite its unusual profile is still considered legal tender issued by the country of Niue.

A classic profile portrait of Queen Elizabeth II appears on the coin’s obverse side, familiar from circulation coins in many Commonwealth nations. It also carries the inscriptions “Elizabeth II,” “Niue,” “2021” and “2 Dollars,” as well as the Lucasfilm copyright and the inscription “1 oz 999 Fine Silver.”

The customer service department at Silver.com is standing by to answer your questions about silver for sale. Call us at 888-989-7223, send inquiries by e-mail, or contact us through our online live chat.