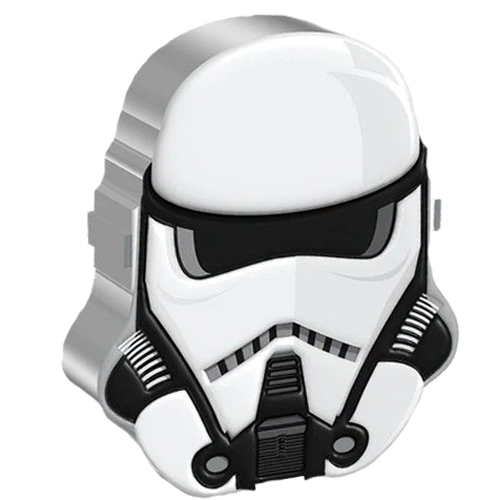 The Star Wars universe has been growing ever since the original film was released in the late Seventies, and later films have brought new character designs to the ranks of the franchise’s iconic edifice of evil, the Galactic Empire. The Imperial Patrol Trooper is a popular recent addition, tasked with carrying out patrols and rooting out enemies of the Emperor on their swift speeder bikes. The 2022 1 oz Silver Niue The Faces of the Empire Imperial Patrol Trooper Shaped Coin commemorates these new soldiers of the Empire and is now available from Silver.com.

Featuring striking colorization, the 2022 Silver Niue The Faces of the Empire Imperial Patrol Trooper Shaped Coin is sure to be popular with collectors and Star Wars fans. It arrives in branded packaging with a custom-made acrylic case, in a box whose display window means it’s ready to showcase on arrival. It ships fully insured with a Certificate of Authenticity that identifies its unique number as part of the mintage.

The Imperial Patrol Troopers in Solo: A Star Wars Story are the latest in a long tradition of stormtroopers of the Galactic Empire: iconic henchmen who have taken on many different armor and helmet designs as they battled tirelessly on their Emperor’s behalf through a succession of films and shows. The speeder bike-riding patrol troopers pursued a young Han Solo in their first screen appearance, and their sleek design and thrilling introduction made them popular with fans.

The coin’s obverse features a legal tender effigy of Queen Elizabeth II, joined by the inscriptions “ELIZABETH II,” “NIUE” “TWO DOLLARS” and “2022.” It specifies the silver content as “1 oz 999 Fine Silver” and bears the copyright and trademark of Lucasfilm.

A colorized portrait of an Imperial Patrol Trooper’s helmet comprises the reverse. It’s sculpted with additional relief details to add interest to the design.

Customer service at Silver.com is available to answer your questions at 888-989-7223. You can also reach us through our online live chat or via e-mail.