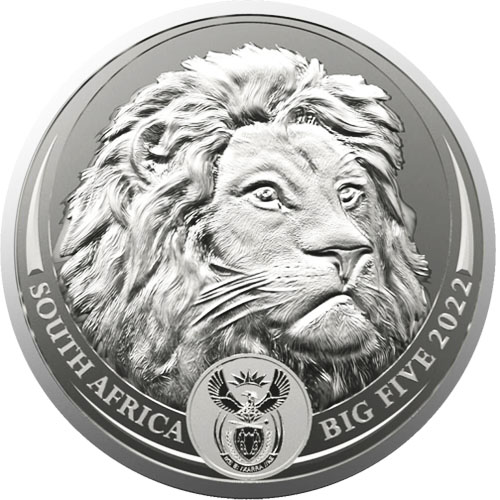 From 2019 to 2021, the South African Mint issued a collection of 1 oz silver coins honoring the infamous Big Five from the African continent. The term Big Five has long been used to refer to the largest and deadliest animal species from the African continent. After the success of the series, the South African Mint is back with new designs for each species featured in the original collection. Today, 2022 1 oz Silver South African Big Five Series II Lion Coins are available to you online at Silver.com.

All of the 2022 1 oz Silver South African Big Five Series II Lion Coins are available to you inside capsule blistercards. These trifold cards have a plastic capsule space at the center that holds the coin. The trifold card has a wealth of information regarding the Big Five Series II collection and the African lion design release.

On the obverse of 2022 Silver South African Big Five Series II Lion Coins is an image of the male African lion. Instantly recognizable with its massive mane of fur around the neck, the male lion lives in a family group known as a pride and the alpha male is typically the lone male in the pride. Other males are either young cubs or lone bachelors who could not find their own pride. The national coat of arms also features on this side of the coins.

The reverse side of the 2022 1 oz Silver Big Five Series II Lion Coins comes with the same depiction used in the original Big Five Series. Here, the faces of two male lions have come so close together in front-facing relief that the two manes appear as one.

Please contact Silver.com if you have any questions about these 1 oz silver coins. You can call us at 888-989-7223, chat with us live online, or simply send us an email with your inquiries.