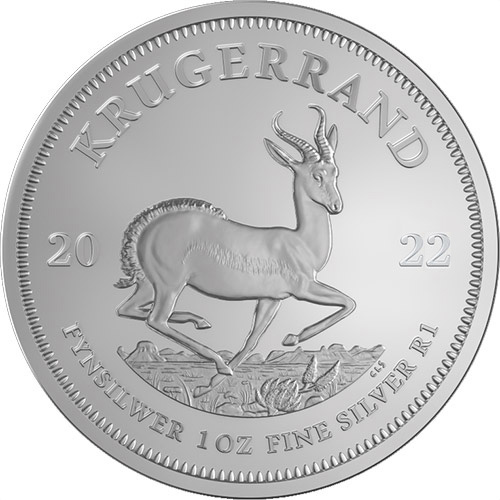 In 2017, the South African Mint expanded its Krugerrand bullion coin series for the first time in 37 years. As the mint celebrated the 50th anniversary of the Gold Krugerrand, it introduced a first-ever Silver Krugerrand for those buying silver. The coin has remained immensely popular in the years since as the mint makes it available annually to investors. Right now, 2022 1 oz Silver South African Krugerrands are available to purchase online at Silver.com.

Each 2022 1 oz Silver South African Krugerrand available here is offered individually or in bulk. Individual Silver Krugerrands are offered in protective flips for shipping. Multiples of 25 coins will ship in an acrylic tube. Multiples of 500 coins are available in boxes that contain a total of 20 tubes. All of the coins are in Brilliant Uncirculated condition.

On the reverse side of 2022 1 oz Silver Krugerrands is a depiction of a Springbok antelope. The national animal of the modern Republic of South Africa and is native to the plains across the south of the African continent.

If you have any questions about these silver coins for sale, please feel free to ask. You can call us at 888-989-7223, chat with us live online, or simply send us an email with your inquiries.