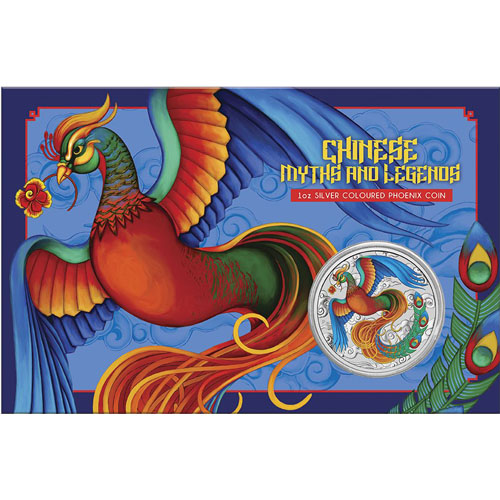 The Chinese Myths and Legends series from the Perth Mint continues in 2022 with a stunning new Phoenix design in vivid color! Known as the Fenghuang in Chinese mythology, the appearance of a phoenix when a new emperor is crowned has signified peace and harmony for the kingdom in various legends. Today, 2022 1 oz Vivid Colorized Silver Australian Chinese Myths and Legends Phoenix Coins are available to you online at Silver.com.

All 2022 1 oz Australian Chinese Myths and Legends Phoenix Coins have been produced by the Perth Mint with .9999 fine silver. These remarkable coins will arrive in beautiful, colorized cards that have a phoenix illustration on the front side. The coins themselves have their own vivid colorization, which makes them incredibly eye-catching. But with only 1,000 coins minted worldwide, you’ll need to act quickly to add this to your Myths and Legends collection today!

The Myths and Legends series is a popular collection produced by Australia’s Perth Mint. The series launched in 2017 and has featured such legendary creatures as the dragon, pixiu, tiger, and phoenix. Previously, the phoenix was featured on a coin along with the Chinese dragon. This new 2022 release marks the first time that the phoenix has been featured on its own in the series.

Queen Elizabeth II is featured on the obverse of 2022 1 oz Vivid Colorized Silver Chinese Myths and Legends Phoenix Coins. The Queen is shown here in left-profile relief wearing both the Coronation Necklace and the George IV State Diadem. Around the rim, you will find hallmarks such as the coin’s purity, weight, year, and denomination.

A phoenix is depicted on the reverse field of 2022 1 oz Vivid Colorized Silver Phoenix Coins. While some cultures depict this bird with purely fiery visuals, the Chinese phoenix often has a multitude of colors on its plumage. In this depiction, we see it with a mix of red, blue, and green hues captured with startling clarity. In the background, you’ll see clouds, which, like the phoenix itself, symbolize good fortune.

We encourage you to ask any questions you may have about silver. Our customer service team at Silver.com is available at 888-989-7223, online using our live chat service, and via our email address.