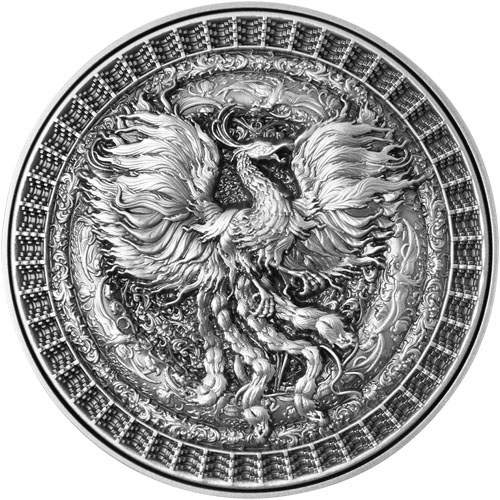 The Phoenix is a magical bird that has appeared in many cultures and is known specifically for its resurrection abilities. A composite of many different types of birds, The Phoenix is almost always depicted with brilliant red, flame-like feathers. In China, the Phoenix holds special significance and is often seen as a good luck omen for those ascending into power. Right now, 2022 10 oz Antique Republic of Chad Forbidden Phoenix Coins are available to purchase online at Silver.com.

In China’s rich mythological history, the Phoenix is a sacred bird believed to carry good omens. While it is known simply as the Chinese Phoenix in the West, in its native land this bird is traditionally called Fenghuang. Feng suggests its male elements, while Huang imparts more female characteristics. However today, the Phoenix is seen as exclusively female in order to balance out with the traditionally male Chinese dragon. Stories purport that this bird originated in the sun, and that it’s made of celestial bodies. These otherworldly characteristics make it a beloved and even sacred creature in China.

The Republic of Chad coat of arms is featured on the obverse side of 2022 10 oz Antique Republic of Chad Forbidden Phoenix Coins. This includes its official motto Unite, Travail, Progress. You’ll also find the words Republique Du Tchad, 2022, and 10000 Francs CFA inscribed around it. This is complemented by an elaborate design featuring various phoenixes in tandem along the edges.

The magnificent Chinese Phoenix is shown in the reverse field of 2022 Antique Republic of Chad Forbidden Phoenix Coins. It is revealed in right-profile with its talons out, its enormous wings spread wide, and its four tail feathers hanging below. Along the border of the reverse are stunning patterns in the tradition of caisson ceilings from Beijing’s complex of temples known as The Forbidden City.

All 2022 10 oz Antique Republic of Chad Phoenix Coins are delivered in display boxes with Certificates of Authenticity. If you enjoy collecting truly novel specimens, then this coin is definitely for you. It uses a special process called Bi-Metal Reverse that enables layers of both silver and copper to define the coin’s body. This creates an overall larger surface that allows for greater appreciation of the 3D high-relief strike and stunning artwork on display.

If you have any questions about silver for sale, please don’t hesitate to ask. Silver.com customer service is available to assist you at 888-989-7223, online using our live chat, and via our email address.