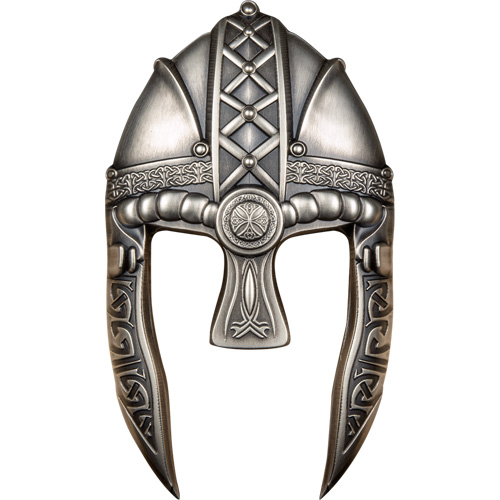 The warriors of the ancient world and the Middle Ages gave the world some of the most memorable arms and armor. One of the most remarkable items worn by soldiers over the last several thousand years were the helmets developed to protect their heads during battle. One of the most memorable designs is the helmet of the Viking warriors of Scandinavia. In the second release of Solomon Islands Antique Helmets, the Vendel Viking helmet appears. Now, 2022 10 oz Antique Silver Solomon Islands Vikings Helmet Shaped Coins are available to you for purchase online from Silver.com.

The design of the Viking Helmet featured in this coin series is inspired by the Vendel Period, an era of Swedish prehistory that was bookended by two important periods in European history. The Vendel Period came after an era known as the Migration Period when constant barbarian invasions occurred as the Western Roman Empire declined in influence and eventually crumbled altogether.

After the Vendel Period, the Viking Age of European history rose as the Vikings began a two-hundred-year period of trading, colonizing, and conquest that saw the Vikings conquer England and raid mainland Europe. This was also the era in which the Vikings reached North America. A key symbol of this time was the helmets worn by Viking warriors in battle.

The obverse of 2022 10 oz Antique Silver Solomon Islands Vikings Helmet Shaped Coins features a portrait of Queen Elizabeth II. Her Majesty is shown in right-profile relief with the Girls of Great Britain and Ireland Tiara.

On the reverse of the 2022 Antique Silver Solomon Islands Vikings Helmet Shaped Coins is an ornate design of a Viking helmet. This version of Viking armor arose during the Vendel Period between 540 AD and 790 AD. This was a period of ornate, animal-themed design on copper-alloy arms and armor in Scandinavia.

These 2022 10 oz Antique Silver Solomon Islands Vikings Helmet Shaped Coins are available in shield-styled, Viking-themed cases that hold the coin safely inside. Included with your purchase is a numbered Certificate of Authenticity, with each coin boasting an antique polish.