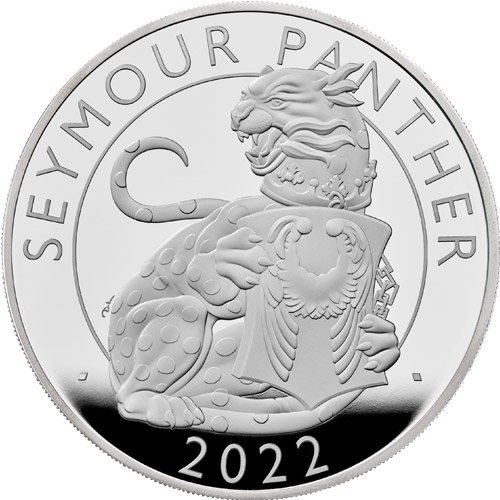 The Royal Mint is out with a new collection of gold and silver for sale that celebrates the heraldic beasts of British history. Following its Queen’s Beast Series, the Royal Mint is now offering fresh designs honoring the House of Tudor, one of Britain’s most raucous ruling dynasties in the 800-plus year history of the crown. Today, 2022 10 oz Proof Silver British Tudor Beasts Seymour Panther Coins available to you online at Silver.com

All of the 2022 10 oz Proof Silver British Tudor Beasts Seymour Panther Coins are available to you here in Royal Mint packaging. The coins are individually housed in black display boxes and come with a Certificate of Authenticity. The new Seymour Panther design is the first proof coin in the Tudor Beasts Series.

On the obverse side of 2022 Proof Silver British Tudor Beasts Seymour Panther Coins is an effigy of Queen Elizabeth II. Her Majesty is shown here in right-profile relief with the George IV State Diadem Crown. The design was created for the Royal Mint in 2015 by Jody Clark and captures the Queen at the age of 89.

The reverse field of 2022 10 oz Proof Silver Tudor Beasts Seymour Panther Coins depicts the Seymour Panther. One of the 10 beasts that line the bridge over the moat into Hampden Court, the prominent royal palace of King Henry VIII, the Seymour Panther features an aggressive feline with a spotted body, flames emanating from its ears and mouth, and the shield of the Seymours. This shield includes the Seymour Wings, conjoined wings with the wingtips facing downward.

Please contact Silver.com if you have any questions. Our team is available to assist you at 888-989-7223, online through our live chat, and via our email address.