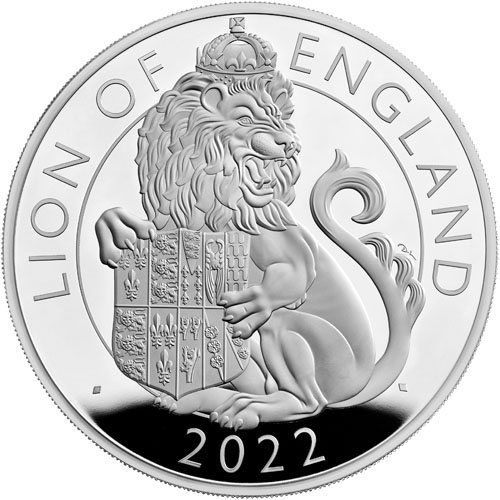 Each 2022 10 oz Proof Silver British Tudor Beasts Lion of England Coin available here at Silver.com comes with the original packaging from the mint. The coins are housed in black presentation boxes from the Royal Mint, with a themed shipper for delivery and an included Certificate of Authenticity. As proof specimens, each coin has frosted designs with mirrored fields.

Throughout the reign of all British monarchs following Richard I, the Lion of England has been there. As a supporter of the Royal Arms and the main figure in the coat of arms of England, the Three Lions, the crowned lion has been a fixture of British heraldry for more than 800 years.

The obverse side of the 2022 Proof Silver Tudor Beasts Lion of England Coin features a portrait of Queen Elizabeth II. In this design, the Queen is shown at the age of 89 with the George IV State Diadem Crown on her head. This portrait was created for the Royal Mint as its fifth-generation effigy in 2015 by Jody Clark.

On the reverse field of 2022 10 oz Proof Silver British Tudor Beasts Lion of England Coins is an image of the impaled arms of King Henry VIII and Jane Seymour. The shield features Henry VIII’s Royal Arms on the left with the coat of arms of Jane Seymour, his third wife, on the right. The Lion of England supports the shield from behind.

If you have any questions when buying silver online, please don’t hesitate to ask. Silver.com customer service is available at 888-989-7223, online using our live chat, and via our email address.