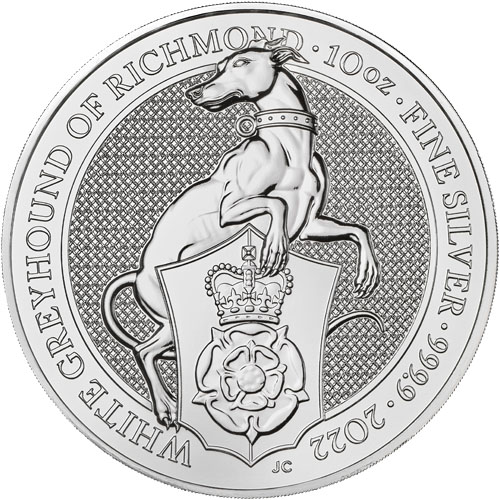 The White Greyhound of Richmond is the final of the 10 heraldic beasts to feature in the Royal Mint’s Queen’s Beast Series. Introduced in 2016, this stunning collection of silver for sale has featured nine previous designs. Each release in the series honors one of the 10 heraldic beasts from the history of the British monarchy that was depicted in statue form at the coronation of Queen Elizabeth II in 1953. Right now, 2022 10 oz Silver British Queen’s Beast White Greyhound Coins are available to purchase online from Silver.com.

Each 2022 10 oz Silver British Queen’s Beast White Greyhound Coin available in this product listing comes with individual packaging or bulk packaging. Individual coins are housed in acrylic capsules, while multiples of 15 are available in boxes. All coins come in Brilliant Uncirculated condition from the mint.

Queen’s Beast Series silver coins were introduced in 2016 by the Royal Mint. The series offers 10 designs ranging from the Lion of England, the oldest of England’s heraldic beasts, to the White Horse of Hanover, one of the youngest additions to the Royal Arms of England or badges of different monarchs.

The obverse of 2022 Silver British Queen’s Beast White Greyhound Coins features a portrait of Queen Elizabeth II. In this right-profile design, the Queen is shown at the age of 89 wearing the George IV State Diadem Crown. This is the latest effigy to grace British coins and was created in 2015 by Jody Clark.

If you have any questions about the silver for sale in this listing, please don’t hesitate to ask. Silver.com customer service is available to you on the phone at 888-989-7223, online through our live chat, and using our email address.