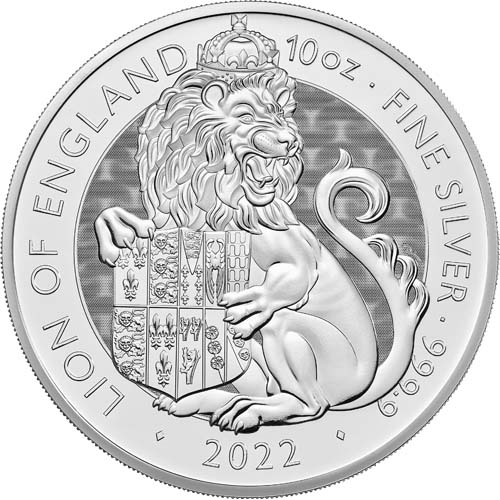 Any quantity available for $6.49 per oz over spot!

The Tudor Beasts Series from the Royal Mint is a new collection of silver coins for sale celebrating the heraldry of the British throne. Rather than focusing on the many beasts that have featured throughout the broader history of the monarchy, this series focuses on the beasts from the Tudor Dynasty in the 15th and 16th centuries. Today, 2022 10 oz Silver British Tudor Beasts Lion Coins are available to you online at Silver.com.

The new Tudor Beasts Series is based on the stone statues of heraldic beasts that line Moat Bridge. This is the entrance to Hampden Court Palace, the center of power during King Henry VIII’s reign and his favorite residence as monarch of England. In the second design of the series, the powerful and eponymous Lion of England features with the Royal Arms of Henry VIII with his third wife, Jane Seymour.

All of the 2022 10 oz Silver British Tudor Beasts Lion Coins available here come individually packaged in plastic capsules. The coins in this weight are packaged in boxes for multiples of 15, with all of the coins available in their own capsules. The coins in this listing come in Brilliant Uncirculated condition. The Lion of England is the debut issue in the BU Series of Tudor Beasts coins.

On the obverse side of 2022 10 oz Silver Tudor Beasts Lion Coins is an image of Queen Elizabeth II. The Queen is shown here in right-profile relief wearing the George IV State Diadem Crown and is shown at the age of 89. Her Majesty’s effigy depicted here comes from Jody Clark and was designed in 2015.

The reverse field of the 2022 Silver British Tudor Beasts Lion Coins comes with a depiction of the might Lion of England. Chosen as a heraldic beast in England during the 12th century, the lion was popularized by King Richard I and became the prominent figure in the first Royal Arms as adopted by Richard the Lionheart in 1198. In this design, the Lion of England supports the impaled arms of King Henry VIII and Jane Seymour.