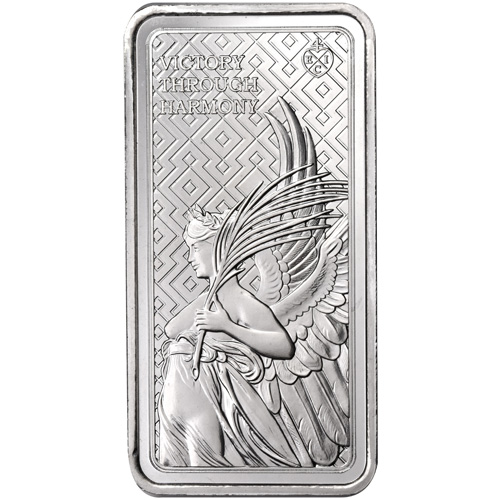 The Queen’s Virtues Series is a bullion coin collection that celebrates the virtues and principles founded by Queen Victoria in the 19th century. Those virtues are carried into the 21st century by her great-granddaughter, Queen Elizabeth II. An ever-present reminder of Queen Victoria, these virtues features on the Victoria Memorial. Those images now appear on silver rectangular coins starting in 2022. Now, 2022 10 oz Silver St. Helena Rectangular Queen’s Virtues Victory Coins are available to you for purchase online from Silver.com.

Following the death of Queen Victoria in 1901, her son, now King George V, sought to honor his mother with a memorial. The Victoria Memorial was approved and constructed outside of Buckingham Palace. The memorial includes six allegorical figures that represent virtues established by Queen Victoria.

The Victoria Memorial stands to this day and is topped by the towering figure of a Winged Angel, a female allegory representative of victory. The Queen’s Virtues Series started with 1 oz silver and gold, and now features the image of Victory on rectangular silver coins.

The obverse of 2022 10 oz Silver St. Helena Rectangular Queen’s Virtues Victory Coins comes with a depiction of Queen Elizabeth II. The longest-reigning monarch in British history, surpassing the reign of her great-grandmother, Queen Victoria, Elizabeth II features on the coinage of Britain and her overseas territories. This design is the Raphael Maklouf bust of the Queen that was designed in 1985 and used through 1997.

On the reverse side of the 2022 Silver St. Helena Rectangular Queen’s Virtues Victory Coins is an image of the female figure of Victory. This image is based on the Winged Angel that tops the Victoria Memorial in London. She stands in left-profile relief with a palm branch, a symbol of victory and peace, in her left hand.

These 2022 10 oz Silver St. Helena Rectangular Queen’s Virtues Victory Coins are available in sealed plastic for individual bars. There are multiples of 10 available in small boxes and multiples of 50 in a Master Box that holds five of the smaller boxes of 10 bars each.