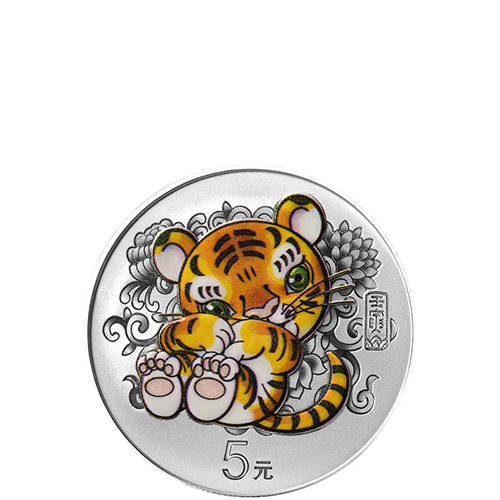 The silver coins for sale in the Chinese Lunar Series collection from the People’s Bank of China and the Chinese Mint feature a great deal of variety. The silver series comes with five coins, none of which is the same as the next. The silver collection has this 15 Gram coin, along with three other weights and four different shapes for the coins. Now, 2022 15 Gram Silver Chinese Lunar Year of the Tiger Coins are available to you for purchase online from Silver.com.

In the Silver Year of the Tiger Release, coins are available in weights of 15 Grams, two 30 Gram coins, a 150 Gram coin, and a 1 Kilo coin. The highest minted coins in the broader series are the two round coin blanks, with the 3 Gram Gold coin offering a mintage of 150,000 coins and these 15 Gram silver coins offering a mintage of 300,000 coins, the highest in the series.

The obverse of 2022 15 Gram Silver Chinese Lunar Year of the Tiger Coins features a depiction of the national emblem. The People’s Republic of China adopted this seal in 1949 and it features the image of the Tiananmen Gate at the Forbidden City with the five stars from the national flag above.

On the reverse side of 2022 Silver Chinese Year of the Tiger Coins is an image of a tiger cub. The small cub is cuddled up on its back amidst some foliage. This colorized design delivers accurate colors for the tiger, with orange fur, black stripes, and a white underbelly.

These 2022 15 Gram Silver Chinese Lunar Year of the Tiger Coins come inside individual boxes with a Certificate of Authenticity available from the mint.

Silver.com customer service is available at 888-989-7223. Alternatively, you can chat with us live online or simply send us an email.