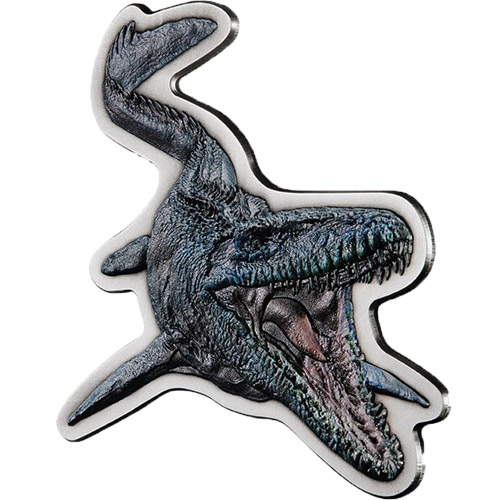 The Jurassic World-themed releases from Perth Mint offer shaped silver coins with antique visuals. These beautiful examples of silver for sale are perfect for collectors and ideal for fans of the Jurassic Park franchise of feature films that dates back to 1993. Now, 2022 2 oz Antique Silver Niue Jurassic World Mosasaurus Shaped Coins are available to you for purchase online at from Silver.com.

The prehistoric world of the dinosaurs was one that modern humans would startle to comprehend. Beasts the size of buildings roamed the Earth and creatures that would dwarf the largest whales of the modern era roamed the seas. One of those ancient beasts was the mosasaur, a massive, predatory beast of the deep in the Late Cretaceous.

Mosasaurs were first discovered when a skull of one of the creatures was found near the Dutch city of Maastricht. In what was then a chalk quarry, a skull that did not quite match known animal species of the day was discovered. Early naturalists believed it belonged to a species of marine lizards.

The obverse side of 2022 2 oz Antique Silver Niue Jurassic World Mosasaurus Shaped Coins comes with a vision of Queen Elizabeth II. Her Majesty is shown here in right-profile relief wearing the Girls of Great Britain and Ireland Tiara. The design was created in 1998 by Ian Rank-Broadley.

On the reverse face of the 2022 Antique Silver Niue Jurassic World Mosasaurus Shaped Coins is a depiction of the massive sea creature. The mosasaur’s exact range is difficult to interpret in the modern era, but based on the modern location of the continents and the discoveries of its fossils over the centuries, the mosasaur is believed to have inhabited wide swaths of what is now the Atlantic Ocean, as well as nearby waterways and seaways. Fossils of the mosasaur have been found on North America, South America, Europe, Africa, Western Asia, and Antarctica.

These 2022 2 oz Antique Silver Niue Jurassic World Mosasaurus Shaped Coins are housed in themed presentation cases with a clear display and come with a themed shipper. There is a Certificate of Authenticity available as well. Each coin is a beautiful, shaped specimen with colorized, proof visuals and an antique polish.