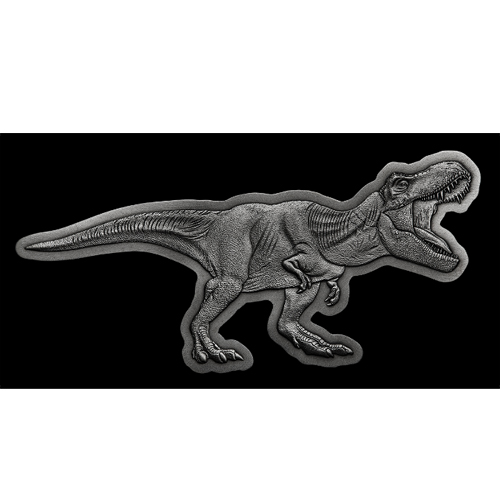 In the Jurassic Park universe, the T-Rex is one of the most iconic characters. In the original Jurassic Park film, she was an antagonist who inadvertently ended up helping the heroes of the story. She has appeared in the sequels as well, and fans are eager to see what role she’ll play in the highly anticipated upcoming release titled Jurassic World: Dominion. Today, 2022 2 oz Antique Silver Niue Jurassic World T-Rex Shaped Coins are available to you for purchase online at from Silver.com.

All 2022 2 oz Niue Jurassic World T-Rex Shaped Coins will be delivered to you inside a themed display box with a numbered Certificate of Authenticity. If you know someone who loves the Jurassic Park franchise, this could make for a great gift idea. The Perth Mint has meticulously crafted these coins in the shape of a T-Rex sign, with a beautiful antique finish applied to each.

In 2022, the 6th installment in the Jurassic Park franchise will be released. Titled Jurassic World: Dominion, the film depicts a world in which dinosaurs and humans inhabit the planet together in a battle for apex predator status. The film features characters from the previous two installments as well as the return of several fan favorites from the original 1993 Jurassic Park film.

Queen Elizabeth II features on the obverse of 2022 2 oz Antique Jurassic World T-Rex Shaped Coins. In a design by Ian Rank-Broadley, Her Majesty appears in right-profile relief wearing the Girls of Great Britain and Ireland Tiara. This crown was gifted to her by Queen Mary for her wedding to Prince Philip in 1947. The coin’s hallmarks are also included.

A T-Rex sign is shown on the reverse field of 2022 Jurassic World T-Rex Shaped Coins. The sign is colored yellow, and the dinosaur appears as a black silhouette. Claw marks are included, as well as the words T-Rex Zone. At the lower portion of the sign is the original Jurassic Park logo.

Silver.com customer service is available at 888-989-7223 if you have questions about silver for sale. We are also available to you online through our live chat and email address features.