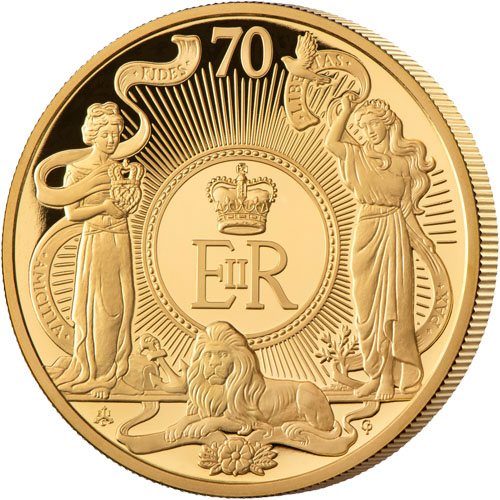 Throughout the Commonwealth, 2022 is a year of celebration. This year marks the historic 70th anniversary of the Queen’s ascension to the throne in England. Since 1952, she has provided a steady hand for the nation as its ruling monarch and head of state. The overseas territory of St. Helena is among the entities honoring the Queen’s historic milestone with gold bullion coins. Today, 2022 2 oz Proof Gold St. Helena Queen’s Platinum Jubilee Coins are available to you online at Silver.com.

St. Helena has been a territory of the United Kingdom for more than a century now and is famously remembered as the location of Napoleon Bonaparte’s exile following his defeat by the British and allied forces in the early 19th century. Since 2010, the Issuing Authority of St. Helena has worked with the East India Company on the design of several bullion coin programs. Among its latest options is the Queen’s Platinum Jubilee Series.

All of the 2022 2 oz Proof Gold St. Helena Queen’s Platinum Jubilee Coins are available to you for purchase with individual packaging. The coins are housed in display boxes with an available Certificate of Authenticity from the producer.

On the obverse of 2022 Proof Gold St. Helena Queen’s Platinum Jubilee Coins is a portrait of Queen Elizabeth II. The longest-reigning British monarch, Her Majesty is shown here in right-profile relief with the George IV State Diadem Crown. Elizabeth II succeeded her father, King George IV, as monarch of England. She ascended to the throne on February 6, 1952, and remains the monarch of England some 70 years later.

The reverse side of 2022 2 oz Proof Gold Queen’s Platinum Jubilee Coins comes with a depiction of two female figures. This design honoring the Queen’s 70th year on the throne includes portraits of allegories representing freedom and peace, on the right, as well as friendship and loyalty, on the left.

Please contact Silver.com if you have any questions about these coins. You can call us at 888-989-7223, chat with us live online, or email us directly.