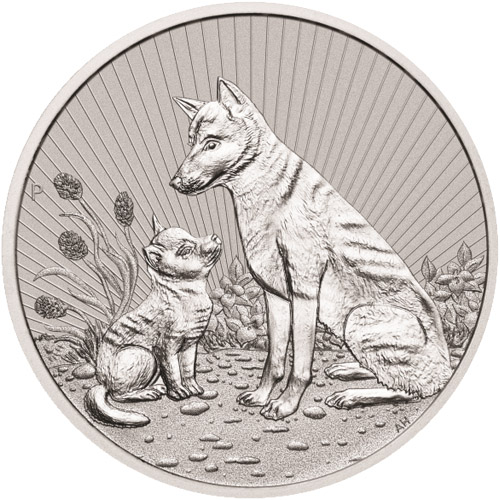 The Next Generation Series from the Perth Mint is one of its most popular annual collectibles. Introduced in 2018, this series not only offers a new mother-child pairing in its reverse design each year, but also uses a piedfort blank. In the case of the 2 oz silver coins in this series, a piedfort blank offers the diameter of a traditional 1 oz silver coin with enhanced depth to fit 2 Troy oz of silver in the same diameter format. Now, 2022 2 oz Silver Australian Mother & Baby Dingo Coins are available to you for purchase online from Silver.com.

The dingo is arguably one of the most well-known canine breeds in the world, though the origins of that fame come from a mystery that occurred in the 1980s in Australia. The story of an Australian couple claiming their young child was abducted by a dingo gave a global audience a passing knowledge of this Australian breed of canine.

While the oldest fossils of a dingo in Australia date to roughly 3,450 years ago, analysis of the genetics suggests that the breed first reached mainland Australia more than 8,000 years ago. In fact, while it is known that the dingo reached Australia that long ago, it is not known what human population brought them to the region. As far as its taxonomic classification, an argument persists as to whether the dingo is a form of domestic dog, a subspecies of domestic dogs or wolves, or its own unique species.

The obverse of the 2022 2 oz Silver Australian Mother & Baby Dingo Coin features a right-profile relief of Queen Elizabeth II. This latest effigy of the Queen was created in 2015 by Jody Clark.

On the reverse side of 2022 Silver Mother & Baby Dingo Coins, you will find a depiction of a mother dingo sitting next to its young pup. Dingos are hearty animals that have adapted a body that allows for agility, speed, and stamina.

These 2022 2 oz Silver Australian Mother & Baby Dingo Coins are in Brilliant Uncirculated condition. The coins are offered individually in plastic flips, by multiples of 10 in acrylic tubes, or by multiples of 100 in Monster Boxes. The box holds 10 tubes.