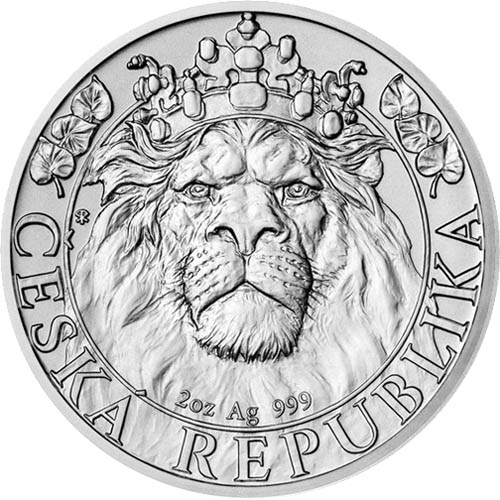 Every year, the Czech Lion is one of the most highly anticipated coins to be released. The Czech Mint has received much acclaim for this series, which is issued annually with a new design. In the Czech Republic, the lion is a national symbol of power and sovereignty and has played a role in the country’s heraldry since the 12th century. Now, 2022 2 oz Silver Niue Czech Lion Coins are available to you for purchase online at Silver.com.

The Czech Mint is a relatively young national mint, having been established in 1993 after the Czech and Slovak Federative Republic split into two independent states. The mint was created under the authority of the Czech National Bank and produces a wide range of coins, medals, and commemorative sets. The Czech Mint also collaborates closely with the Jablonec School of Applied Arts, which teaches the art of coin making. Many of its employees are graduates of the school.

The obverse of 2022 2 oz Silver Czech Lion Coins features the popular effigy of Queen Elizabeth II. This portrait was designed in 1998 by Ian Rank-Broadley and depicts the Queen wearing the Girls of Great Britain and Ireland Tiara. Surrounding the portrait is a shield with inscriptions around it of the country, year, and denomination. A heraldic eagle combining parts of the St. Wenceslas, Moravian, and Silesian designs occupy the background.

On the reverse side of 2022 Silver Niue Czech Lion Coins is a regal lion. This stunning design shows the lion in vivid detail as a contrast to previous releases of this coin. The lion wears the Crown of Saint Wenceslas, which historically was used for the coronation of Bohemian kings. Linden branch leaves are shown along the edge in recognition of the Czech Republic’s national tree. Inscriptions read Ceska Republika, 2 oz Au .999.

These 2022 2 oz Silver Czech Lion Coins arrive in protective plastic flips. They have been produced by the Czech Mint and are official legal tender under the monetary authority of Niue Island. All coins in this listing will be delivered in Brilliant Uncirculated condition. This means you can expect your coins to be in nearly flawless condition.

Silver.com customer service is available at 888-989-7223 to answer questions about silver coins for sale. We are also available to you online using our live chat and email address features.