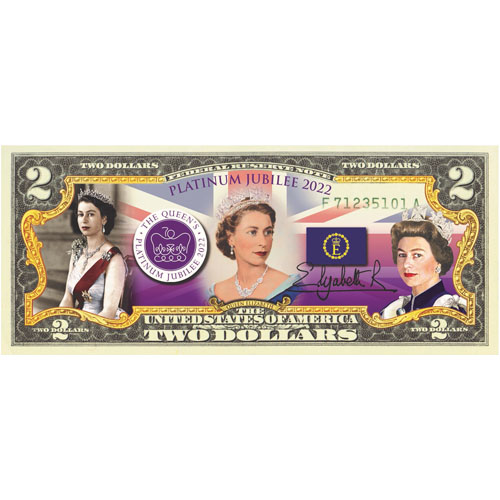 On February 6th, 2022, Queen Elizabeth II made history by becoming the first British monarch to celebrate a Platinum Jubilee. This refers to the 70th anniversary of the Queen’s accession. Her longevity is an inspiration to many, and even at the age of 95 she continues to play an active role in British life. In honor of this occasion, The Merrick Mint has produced a stunning $2 bill with colorized images of Her Majesty. Right now, 2022 $2 Queen Elizabeth II Platinum Jubilee Legal Tender Notes are available to purchase online at Silver.com.

All 2022 $2 Queen Elizabeth II Platinum Jubilee Notes have been created from genuine United States currency. Each bill comes from an untouched pack of official Federal Reserve notes, where it then goes through a pioneering colorization process by The Merrick Mint. These collector notes arrive inside a presentation folio and include a Certificate of Authenticity from the mint.

Instead of Thomas Jefferson, a triptych of Queen Elizabeth II portraits is featured on the obverse of 2022 $2 Platinum Jubilee Legal Tender Notes. These images are fully colorized and depict Her Majesty at different points throughout her reign. Additional details on the obverse include a backdrop of the British flag and detailed depictions of the Queen Elizabeth flag and the official Platinum Jubilee logo.

John Trumbull’s 1818 Declaration of Independence painting is featured on the reverse of 2022 Queen Elizabeth II Platinum Jubilee Legal Tender Notes. This replica version of the original oil painting shows the Founding Fathers presenting the draft of the declaration to Congress.

Queen Elizabeth’s accession occurred on February 6th, 1952. This monumental event came as a surprise since Her Majesty never expected to be a queen in her lifetime. However, when her predecessor King Edward VIII abdicated the crown, she became heir to the throne. Despite the unexpected nature of her succession, Queen Elizbeth has been one of the most beloved monarchs in history, in part because of her unceasing humanitarian efforts. To this date, she contributes to over 600 patronages worldwide.

If you have any questions, Silver.com customer service is here to help. Please call us at 888-989-7223, chat with us live online, or simply send us an email with your inquiries.