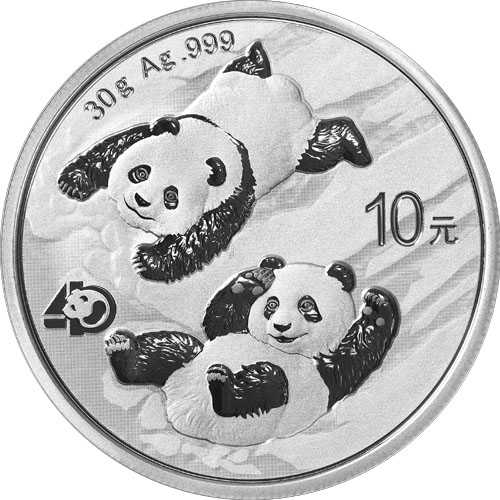 Among the best-selling silver coins for sale in the world is the Silver Chinese Panda. Introduced by the Chinese Mint in 1983, the series did not have an annual-release BU coin until 1989. Nonetheless, the Silver Panda is participating in the mint’s 40th-anniversary celebration for the series. Coins in the 2022 Silver Panda release features a 40th-anniversary mark on the obverse side. Today, 2022 30 Gram Silver Chinese Pandas are available to you online from Silver.com.

On the obverse of 2022 30 Gram Silver Chinese Panda Coins is a depiction of two Giant Pandas. The panda is a unique species of bear with black-and-white fur patches throughout its body. In this design, two pandas are sliding down a snowy hill with one on its stomach going head first and the other going down on its back feet first. This side of the coin comes with the 40th-anniversary mark consisting of the 40 digits with a panda in the 0.

The reverse side of 2022 Silver Chinese Pandas maintains the use of the Hall of Prayer for Abundant Harvests. This design features on the coins in the Chinese Panda Series since the 1982 debut of the Gold Pandas.

These 2022 30 Gram Silver Chinese Pandas are available to you individually in acrylic capsules. Multiples ship in trays of 30 or Monster Boxes of 600 coins. All of the coins are offered here in Brilliant Uncirculated condition.