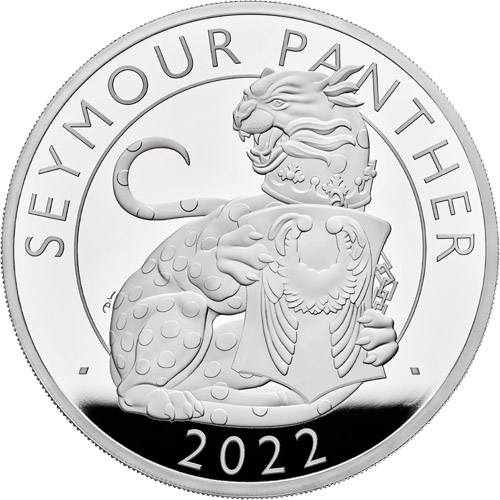 The rise of the House of Tudor in the 15th century came as a result of the end of the Wars of the Roses when the House of Lancaster definitively defeated the House of York. The House of Tudor was founded by Henry Tudor, who rules as King Henry VII, but one of the most memorable monarchs from the dynasty was King Henry VIII. His third wife is the first honored in the new Tudor Beasts bullion series from the Royal Mint. Today, 2022 5 oz Proof Silver British Tudor Beasts Seymour Panther Coins are available to you online at Silver.com.

The new Tudor Beasts Series from the Royal Mint comes with both gold and silver coins for sale. The proof range of coins comes with a variety of gold and silver weights, each with limited mintage figures and presentation packaging from the mint. The first release in the series honors Jane Seymour, the third wife of King Henry VIII.

All of the 2022 5 oz Proof Silver British Tudor Beasts Seymour Panther Coins are available with presentation packaging from the Royal Mint. The coins are housed in capsules and set in black presentation boxes that have a flip-up base to display the coin upright. The coin and case ship together in a themed box with a Certificate of Authenticity available. The coins have proof designs with mirrored fields. The Seymour Panther design represents the first proof coin in the Tudor Beasts Series.

On the obverse side of 2022 Proof Silver British Tudor Beasts Seymour Panther Coins is an image of Queen Elizabeth II. This portrait is the fifth-generation effigy of the Queen to feature on British coinage and was designed for the Royal Mint in 2015. In this design, Elizabeth II is aged 89 years and wears the George IV State Diadem Crown.

The reverse field of the 2022 5 oz Proof Silver Tudor Beasts Seymour Panther Coins comes with the design of the Seymour Panther. The panther was gifted to Jane Seymour upon her wedding to King Henry VIII. He chose the panther for Jane Seymour as a means of saving money when replacing and destroying the arms and badges of his previous wife, Anne Boleyn. She had used a leopard in her arms and badges, which Henry VIII modified to appear as a panther for Jane Seymour.