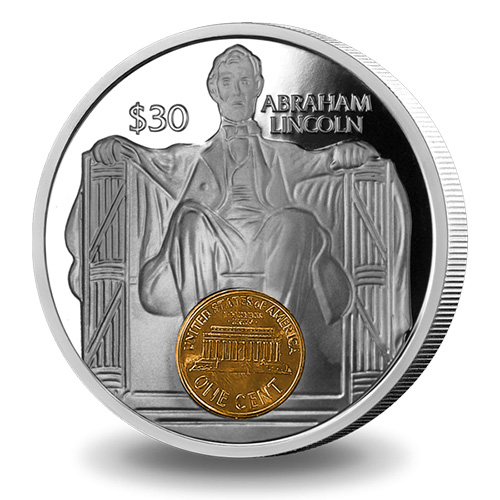 In 2022, the 100th anniversary of the Lincoln Memorial comes around and offers the nation a chance to honor the legacy of its 16th president. The Pobjoy Mint of England has issued several coins on behalf of the British Virgin Islands to mark this commemorative occasion. Right now, 2022 5 oz Proof Silver British Virgin Islands 100th Anniversary Lincoln Memorial Coins with a Gold Plated Penny are available to purchase online from Silver.com.

Each of the 2022 5 oz Proof Silver British Virgin Islands 100th Anniversary Lincoln Memorial Coin in this listing comes to you with a red display box from the Pobjoy Mint and an included Certificate of Authenticity. The coins in this release come with a gold-plated US Penny.

The inclusion of these particular pennies is notable. From 1959 to 2008, the circulation US Penny featured the Lincoln Memorial on the reverse. If you look closely enough at the design of the memorial, you can see the famous statue of President Lincoln inside. This side of the penny is set facing outward on the reverse of the coin. President Abraham Lincoln’s bust has graced the obverse of the US Penny since 1909.

On the reverse side of 2022 5 oz Proof Silver British Virgin Islands Lincoln Memorial Coins is an image of the famous statue from within the monument. Construction on the Lincoln Memorial began in 1914 and concluded in 1922. The structure is built in the style of the Parthenon from Greece and features towering marble pillars at its entrance, with a seated statue of President Lincoln inside its main hall.

If you have any questions when buying silver, please don’t hesitate to ask. Silver.com customer service is available to assist you at 888-989-7223, online using our live chat, and via our email address.